Beijing, China – Chinese President Xi Jinping has made his first visit to Wuhan since the outbreak of the coronavirus in what could be seen as a signal from the government that the health crisis is coming under control.

Xi, who has been largely unseen throughout the epidemic, made his first appearance on Tuesday in the region that had been under lockdown for weeks.

State news agency Xinhua said the president wanted to “visit and express regards to” those affected by the infection, including medical workers and patients.

Images published in state-owned media outlets showed Xi greeting the healthcare workers and meeting with health officials, as well as waving to a coronavirus patient through video conferencing.

Xi’s visit came at a time when reported cases of coronavirus infection, known as COVID-19, are steadily declining in China.

In recent days, only a few dozen confirmed cases were reported, compared with thousands during the peak of the epidemic.

Many provinces in China have also reported zero new cases for a number of days.

Additionally, the government also ordered the closing down of the makeshift hospitals in Wuhan due to the decline in the number of reported cases.

According to reports, less than 20,000 of the confirmed cases are still under treatment, with almost 60,000 having reportedly recovered.

Throughout the outbreak in China, President Xi made very few public appearances.

For people in Wuhan, who have been under quarantine measures, his visit did little to appease residents who are becoming more resentful of the government’s response.

“When all of us were asking where Xi Jinping was in the initial days of the outbreak, he made zero appearance,” a Wuhan resident, who asked to remain anonymous for fear of repercussions, told Al Jazeera.

“After the peak of the epidemic had passed and the outbreak is under control, he came and told people ‘remember me, I have indeed come to visit you’. This kind of political show is disgusting.”

President Xi Jinping on Tuesday visited residents who are quarantined in their homes in a community and frontline workers in Wuhan, the epicenter of the #COVID19 outbreak, following a stop at Huoshenshan Hospital. pic.twitter.com/C3J53vSWI8

Xi had placed Chinese Premier Li Keqiang on the front line of the so-called “people’s war against the epidemic”. Li was the highest-ranking member of China’s ruling Communist Party to play a prominent role, appearing in Wuhan and leading a taskforce in Beijing.

“I don’t really care if Xi Jinping is visiting or not,” another Wuhan resident told Al Jazeera.

“All I really care about is if the situation is actually under control instead of just another show. I also care about when the lockdown will end. We are getting insane here.” according to another resident.

Some residents, however, were more optimistic following the president’s visit.

“My parents are really excited because they think this is a sign of Xi Jinping being confident in the situation being under control in Wuhan,” a third Wuhan resident said.

“But, at the end of the day, it’s still those medical workers and volunteers that really helped the city embark on the road to go back to normalcy.”

Analysts have suggested that Xi’s absence is part of his strategy to avoid blame should the outbreak grow out of control.

“Xi dropping out of the media spotlight in this outbreak suggests a strategy by the central government to lay major blame on the local cadres,” said George Crane, a Chinese politics expert at Williams College in the US.

The world’s second-largest economy was severely affected by the outbreak, sending shockwaves worldwide. On Monday, stock indexes in the US witnessed the steepest single-day fall since the 2008 financial crisis.

“Xi Jinping’s visit certainly signals some degree of confidence, which comes as investors around the world need a boost in their confidence,” Victor Shih, an associate professor who studies Chinese economy and politics at the University of California, told Al Jazeera.

Many small businesses in China are running out of cash and now face the risk of dissolving, while workers have been unable to return to work and students had to resort to online education. 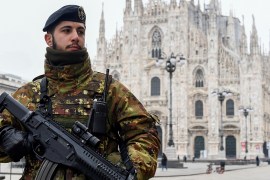 What is happening, why and how are Italians reacting? Your questions about the Italian lockdown answered. 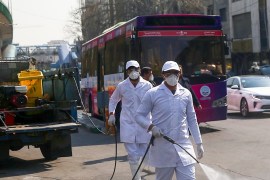 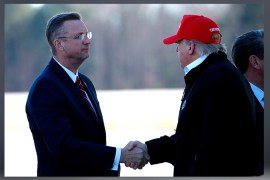 Trump not tested, says White House ahead of US president’s plan to announce tax-relief measures over the disease.