Puneh Gorji and Arash Pourzarabi were married in Iran on January 1. A week later, the newlyweds were returning to Canada to resume their studies at the University of Alberta in Edmonton when their plane was shot down over the Iranian capital, Tehran.

All 176 people on board the Ukrainian airliner were killed.

“When I saw the name of my niece on the list of the victims, it was the worst experience of my life,” Gorji’s uncle, Ali Asghar Gorji, said via telephone from his house in Edmonton. “The only thing that can comfort me now is justice.”

For three days afterwards, Iran denied any involvement in the downing of the plane. Then on January 11, Iran announced an IRGC operator had “unintentionally” shot down Flight PS752 amid fears of a counterattack by the US. The admission triggered scattered protests at universities in Tehran and other cities, shattering the sense of unity in Iran following Soleimani’s killing. Dozens of victims of the plane crash were graduates from Iranian universities who were visiting families in Iran while on holiday from fellowships, graduate schools and promising careers abroad.

Iran’s President Hassan Rouhani, meanwhile, issued a statement calling the tragedy a “disastrous mistake”. He promised further investigations to prosecute perpetrators behind the incident and to inform families of the victims of the truth of what had happened. A spokesman for Iran’s judiciary on January 14 said several people accused of a role in the incident had been arrested, without elaborating further.

But Gorji does not believe the Iranian government would deliver justice.

“We believe that they committed this crime intentionally,” he said. “They allowed commercial flights on the same night they attacked bases in Iraq. That is a declaration of war and they have to cancel all commercial flights.”

The 48-year-old engineer said he believed Iran’s government had used “Iranian passengers as human shields” by keeping the country’s airspace open. Gorji said he and other families of victims have filed a class-action lawsuit against Iran for “an act of terrorism” in the Superior Court of Justice in Ontario.

Some 57 of the victims were Canadian, most of them dual nationals holding Iranian citizenship.

“The lawsuit is aimed at proving in a court of law that they [Iran’s government] committed a crime. This would be an important message to the Iranian people and the world,” Gorji said. If the case proved successful, the second step would be to lobby the Canadian government to sue Iran at the International Criminal Court, he said.

“I want justice for my niece … I had to do something and I can do it here,” he said.

Gorji declined to comment further on the lawsuit, but in a Facebook post on January 25, he said families of the victims had launched a lawsuit against Iran’s Supreme Leader Ali Hosseini Khamenei and the IRGC. The case – John Doe v Islamic Republic of Iran – was filed on January 24 and seeks $1.5 billion Canadian dollars ($1.1bn) in compensation from Tehran.

Canadian courts do not typically have jurisdiction over foreign states, but a 2012 law lifted that immunity for countries Canada considers “foreign state sponsors of terrorism”. Iran and Syria are on that list.

To find out details of what exactly happened on January 8, Iran has to decode the flight’s black boxes. Canada and Ukraine are pressuring Iran to release the data recorders, but Tehran – which has rights under global aviation rules to lead the investigation – has offered contradicting statements on its plans.

An aviation official who initially said the black boxes would be sent to Ukraine backtracked on his comments a day later, saying Iranian authorities have asked US and French authorities to lend them the equipment needed to read the data. Canada’s Prime Minister Justin Trudeau, however, has said Ottawa will continue to pressure Tehran to send the black boxes to France.

Meanwhile, some experts have expressed concern about Iran’s capability and willingness to handle the investigation beyond technical issues.

“They have a strong tradition of sweeping it under the rug rather than addressing it in a meaningful way,” said Sanam Vakil, deputy director of the Middle East North Africa Programme at Chatham House. “To take responsibility and accountability is not what they have succeeded in doing over the past decades.”

But Mohammad Marandi, the head of American Studies at the University of Tehran, said it was the US that bore ultimate responsibility for the downing of the plane.

“The real culprit here, the most responsible, and they can’t hide it, is the US for acts of war against Iran and creating a situation where Iran had to be on high alert and was prepared for an attack,” he said, dismissing allegations Tehran would hide the truth behind the plane crash.

“The notion of a cover-up is nonsense and the evidence is that from the beginning Iran invited international teams to come to Iran,” he said, referring to Iran’s offer to foreign experts, including from Ukraine and the United Nations, to join the investigation.

“If there is a case to be filed, that should be against the US government and the US president. Whatever the court says, these [Iranian soldiers] are people who acted unintentionally … The circumstance that the US have created, through sanctions, through the killing of senior officials, through acts of war, those are all intentional acts. Therefore the US bears the whole responsibility.”

Meanwhile, in Tehran, people who spoke to Al Jazeera described an increasing sense of distrust in the government they believed should be taking care of them

Nima, a 28-year-old young man who gave only one name, used the words “hopelessness, helplessness and despair” to describe his anxiety about the future, while Sarah, a 36-year-old teacher, said the shooting down of the plane as well as a brutal government crackdown in November against people protesting against a hike in fuel prices “show this regime doesn’t want us”.

Bita, a 52-year-old nurse, said: “I was asking myself, what else did they lie about?”

Babak Roshanaei Moghaddam, a psychiatrist and psychoanalyst based in Tehran, said the shooting down of the plane was a traumatic event, not just for families of victims but for the whole country.

“The whole nation is grieving, each person in their own way,” said the founder and director of the Tehran Center for Psychoanalytic Studies.

“Losing last bits of hope in relationship with a government whose basic trust had already been compromised for many other reasons, can be a very unsettling and anxiety-provoking position.” 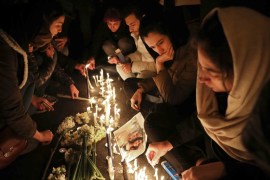 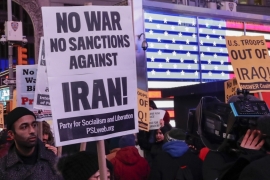