Israeli aircraft struck Hamas’ positions in Gaza early on Thursday after Palestinians in the enclave launched projectiles and explosive balloons across the border, the Israeli military said in a statement.

Palestinian security sources and witnesses in Gaza reported hits on unspecified targets north of al-Shati refugee camp near Gaza City and a Hamas facility in the southern Gaza Strip. They said nobody was injured.

On Wednesday night the Israeli army reported: “Two mortar shells were fired from the Gaza Strip into Israeli territory” at open areas.

There were no reported casualties.

The incidents come as part of near-daily exchanges along the Gaza-Israel separation border after the announcement last week of US President Donald Trump‘s proposed Middle East plan.

Palestinians strongly rejected the plan which promised a two-state solution to the Palestinian-Israeli conflict and gave Israel an “undivided capital” in Jerusalem. Palestinian leaders and people have promised to “fight against the deal”.

Israel has since deployed additional troops near the Gaza separation barrier, and to the occupied West Bank’s Jordan Valley, which under the plan would be annexed to Israel.

Trump’s plan seeks to disarm Hamas, the group which has governed the Gaza Strip since 2007 and is designated a “terrorist” organisation by the US.

“Hamas will not accept to be disarmed. It is not acceptable to talk about the disarmament of Hamas or any other Palestinian resistance faction.

“The Palestinian resistance arm is legitimate and our right to defend ourselves against this brutal occupation is legally guaranteed.”

Israel has launched three large assaults on Gaza since 2008 but over the past year, Palestinian resistance groups have gradually struck an informal truce with Israel, under which Israel has eased its crippling blockade of the besieged enclave.

But last November, tensions escalated after Israel killed a senior leader of the Islamic Jihad armed group in Gaza and launched attacks killing at least 36 Palestinians. 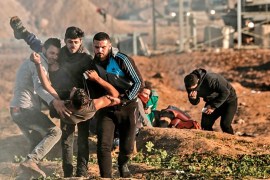 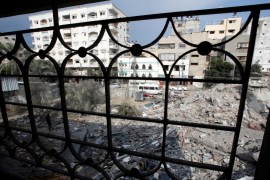 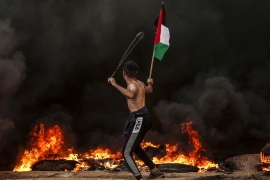 Gaza protests: All the latest updates

Since protests began on March 30, Israeli forces have killed at least 214 Palestinians and wounded more than 18,000.