West Des Moines, Iowa – The results of the Iowa caucuses, the first voting contest of the US 2020 presidential election season, have been delayed “due to quality checks”, the Iowa Democratic Party said late on Monday.

“The integrity experienced a delay in the results due to quality checks and the fact that the [Iowa Democratic Party] is reporting out three data sets for the first time,” the party said in an emailed statement, adding later that there was “simply a reporting issue” and there had been no “hack or intrusion” with the app the precincts were using to report results. It was unclear when exactly official results would be announced.

“We know one thing: we are punching above our weight,” said Klobuchar, the first of the 10 candidates participating in Iowa’s caucuses to address the delay.

Warren told her supporters that they may not “know the results from tonight, but tonight has already shown that Americans have a hunger for big structural change”.

Both Biden and Sanders told those gathered at their respective headquarters they had a “good” feeling about the results.

“When those results are announced, I have a good feeling we’re going to be doing very, very well in Iowa,” Sanders said.

“We feel good about where we are, so it’s on to New Hampshire,” Biden said, referring to next week’s primary in the northeastern US state.

Buttigieg, speaking later in the night, said: “Tonight, Iowa chose a new path … to say that the time has come to turn the page and start a new chapter”.

Without the results from nearly 1,700 precinct sites across the state, it is still anyone’s game. Polls going into Monday night’s caucuses indicated Sanders and Biden leading a still crowded field of candidates, followed by Klobuchar, Warren and Buttigieg.

Iowa, a Midwestern state, kicks off the presidential nominating contest every four years. In 2016, 171,000 of the two million registered voters attended a caucus. The state Democratic party leadership and campaigns are hoping for much higher numbers this time around, especially given that the country is deeply divided along party lines and its opinions of the current president.

The Republicans also held caucuses across the state, with current President Trump declared the winner early in the night.

In a first this year, raw numbers from all precincts will be released for both rounds of caucusing, as well as the final overall results. That means the public will be able to see exactly how less-popular candidates did across the board. In the past, only final numbers were released. That change appeared to have contributed to the delay of Monday night’s results, leading to confusion and frustration across the state.

“We found inconsistencies in the reporting of three sets of results,” IDP Communications Director Mandy McClure said in a statement.

“In addition to the tech systems being used to tabulate results, we are also using photos of the results and a paper trail to validate that all the results match and ensure that we have confidence and accuracy in the numbers we report,” she added. “This is simply a reporting issue, the app did not go down and this is not a hack or an intrusion. The underlying data and paper trail is sound and will simply take time to further report and the results.”

The delay was a sobering moment in what had been an electric night for Iowans at different caucus sites.

Residents of Precinct 118 in West Des Moines began its caucus with cheers as supporters of several of the US Democratic presidential hopefuls gave one-minute speeches.

For 15 minutes, caucus-goers moved around the room, grouping up under signs for their first-choice candidates, including one woman who remained committed to caucusing for Cory Booker, who dropped out of the race last month.

“I just love Cory,” said Kathy Ferguson, who turned down requests to join other candidates’ campaigns that were struggling to meet the minimum viable 15 percent.

According to the precinct leader, there is no official list of candidates, so any name can be voted on.

For Moneer Alazzawi, who became a US citizen late last year, the entire experience was exciting.

“This is really cool. I’ve never done it before, not even in Iraq. When we used to vote, we never caucused,” Alazzawi told Al Jazeera.

When time was called in West Des Moines, the results showed viability for Warren, Klobuchar, Buttigieg and Sanders – whom Alazzawi decided to caucus for. Neither Biden nor entrepreneur Andrew Yang, who placed fifth and sixth, met the viability threshold.

Another 15-minute round was called and supporters from other campaigns once again networked through the crowd, trying to convince the few supporters of US Representative Tulsi Gabbard and Senator Michael Bennett to join their group.

Yang’s group disbanded after holding on up until the last minute. Biden’s group, with help from former Iowa Governor Chet Culver, was able to swing enough supporters from other non-viable camps to squeak out a fourth-place win and hit the viable threshold. Sanders came out on top as the clear winner of precinct 118.

While political observers usually look to the top three candidates who emerge from the Iowa caucuses, many say the top four candidates are significant.

The first step in what the Democrats hoped would be a march to the White House, has been a colossal misstep. A new system, which would feed results from the caucuses across the state to the local party headquarters failed in spectacular style and to make matters worse, the back-up plan didn’t work either.

The world was watching Iowa. For the first time in three years, we should have been given an idea who the voters wanted to tackle Donald Trump in November, which candidate they thought was more electable, had a better plan. Instead, what we got was anger and confusion.

From what can be pulled together from local observers, it looks like Bernie Sanders is going to win, Elizabeth Warren and Pete Buttigieg are going to do well and former Vice President Joe Biden had a very bad night. 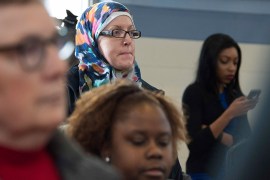 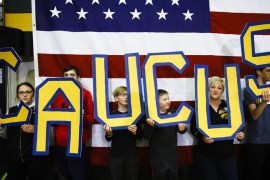 US election 2020: What are presidential primaries and caucuses?

The start of the caucus and primary season gets under way on Monday. Here’s what you need to know.