Manila, Philippines – The announcement of the first coronavirus death in the Philippines – the first outside China – came just as millions of Filipinos headed to church for mass in the predominantly Catholic nation.

There was anger. And more than a little anxiety.

The government officials who faced the cameras and delivered the news, looked exhausted as they tried to explain the situation to the public and fend off questions from journalists.

It was not just that someone had died, but the revelation that there were two cases when Health Secretary Francisco Duque III had announced last Thursday that there was just one.

“(The health department) is assuring the public that all measures needed to contain the spread of the virus is being strictly implemented and followed,” Duque said, adding that the hospital where the patient was taken had “implemented rigorous infection control protocols while caring for these patients.”

Four other people are awaiting the results from their tests, while 24 had tested negative as of late Sunday.

The Philippines is the first country outside China to record a coronavirus death, which has sent shockwaves through Metro Manila – a city with a population of 12.8 million – and raised questions about government transparency and its ability to deal with the infection.

At St Clement Catholic Church in a suburb of Manila, Father Lody Garcia spent portions of his homily on Sunday warning his 800 parishioners to take extra precautions to avoid the infection and observe proper hygiene.

He also warned people to avoid the usual handshakes when greeting fellow churchgoers.

“We should avoid holding hands while we sing the Lord’s Prayer,” Father Lody told his congregation.

Many of those at mass had chosen to wear face masks, but most still opted to go without. At least 86 percent of the country’s 102 million population are Catholics.

At the end of the service, a special prayer was offered to health workers at the front line of fighting the outbreak and the patients suffering from the virus.

The country’s organisation of bishops also issued a rare prayer, known as an Oratio Imperata, a special invocation made during times of calamity.

Duque said the 44-year-old man who died was the partner of the woman whose infection was announced last week. Both were admitted to the San Lazaro Hospital, the centre for infectious diseases in Manila on January 25.

The man, reportedly complained of a cough and sore throat, before developing fever and pneumonia. He also showed “signs of improvement”, before his condition deteriorated suddenly 24 hours before his death, the health secretary said.

The two had travelled to two other islands in the Philippines during the course of their trip from Wuhan, exposing themselves to an undetermined number of people in the country after arriving in the country from Wuhan through Hong Kong on January 21.

On ordinary days, we are terrified about getting hospitalized in our privatized and hypercommercialized health care system.

That’s partly why we’re furious about Duterte’s response to #coronavirus.

Philippine officials are now trying to track down all those who were on the same flight as the two coronavirus patients, as well as people working in hotels and other places they visited.

After the woman’s case was announced, Filipinos rushed to pharmacies, emptying the shelves of face masks even as Duque claimed they had “no effect” against the infection.

The scale of public concern was so high that President Rodrigo Duterte was forced to order a partial ban covering passengers from the province of Hubei where Wuhan is the capital.

With the death on Sunday, Duterte ordered widened the travel ban – something many citizens had been demanding since China effectively sealed off Wuhan.

The new order covers all passengers who travelled directly from mainland China, Hong Kong and Macau, according to Duterte adviser and Senator Bong Go. 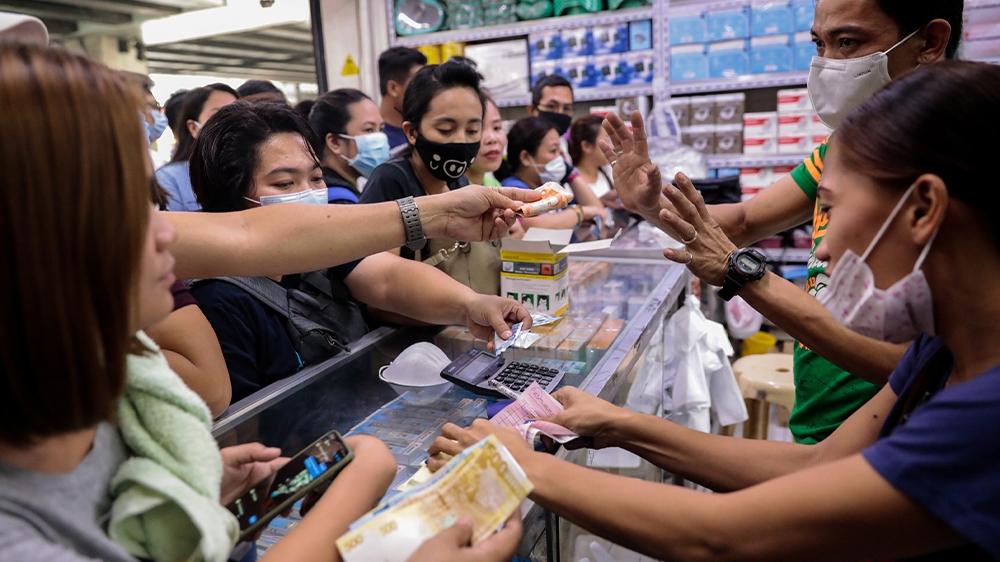 An outline of the executive order released later on Sunday also stated that those who travelled from other countries but had been to China and the two semi-autonomous territories within the last 14 days would also be barred from entering the Philippines.

Filipino citizens and permanent residents from those areas will be subject to quarantine.

Duterte, who has developed a close relationship with Chinese President Xi Jinping, had been reluctant to order a total ban because the Philippines wanted to attract more visitors from China. During the first 10 months of 2019, 1.4 million Chinese visited the country, boosting its tourism market.

As late as Thursday, as the contagion spread around the world, Duterte brushed aside the issue. “Our problem now is drugs,” he said, drawing a flurry of criticism.

At the country’s main international airport in Manila on Sunday, health workers set up thermal scanners leading to the immigration exit.

Most of the passengers, airport workers and well-wishers were wearing protective masks.

Roger Agias, a customs official, told Al Jazeera that they were working closely with immigration and health agencies to monitor the arrival of visitors.

In Manila, Mayor Francisco Moreno said the city government will also distribute 400,000 face masks to students in public schools across the city.

Presidential Communications Secretary Martin Andanar appealed for calm on Sunday, saying the Duterte administration was “doing everything … to contain the spread of the virus.”

Antonio Montalvan, a columnist and professor from Mindanao, noted how the call to remove Duterte had trended online, because of his “failed” governance.

“The President’s late decision to issue a temporary travel ban has nothing to do with protecting us, Filipinos, and everything to do with him preserving his political capital because he felt the nation’s anger,” opposition politician and former solicitor general Florin Hilbay, wrote on social media.

Elsie Corimo, a 43-year-old single mother, told Al Jazeera that she was concerned about the safety of her two children, after learning of the coronavirus death.

She complained that prices of face masks had risen sharply in the last few days, and is worried that pharmacies might run out. She has resorted to recycling the masks her children used previously, washing them by hand with detergent before drying.

“It is better for them to get at least some protection than having none at all,” Corimo said.