Europe is on course to have one of its mildest winters on record after a warm December was followed with an even warmer January.

Cooler weather is expected by the end of this week before temperatures gradually begin to climb again.

The unseasonal weather is caused by a steady feed of warm winds drifting in from the Atlantic Ocean, which bring some rain but also a substantial amount of clouds that prevent night-time frosts.

Parts of northern Europe including Scandinavia, the Baltic states and western Russia, which normally struggle to get above freezing at this time of the year, have been remarkably mild.

Denmark has had its warmest January on record, with an average daytime high of 5.4 degrees Celsius (42 Fahrenheit). This eclipsed the previous record of exactly 5C (41F).

In the past 30 years, January has become 1.6 degrees warmer – and this year, the country has had no snow and very few frosts.

Similarly, Norway had its warmest January day on record with a high of 19C (66F) in the village of Sunndalsora on January 2 – a massive 25 degrees above average.

Even the Scottish highlands recorded their hottest December day in 70 years. A weather phenomenon known as the Foehn effect caused temperatures to soar to 16.8C (62F) at 03:00 GMT in northern Scotland.

Elsewhere, Moscow had its warmest December in 133 years, notching up its warmest day for that month in the process with a high of 5.6C (42F) on December 18. December’s weather was so mild that authorities were forced to bring in artificial snow for the festive period.

While it remains mild for now, temperatures are expected to struggle to reach minus 10C (14F) by Friday. This will make it the coldest day of the season so far.

A cold blast of northwesterly winds is also expected to haul temperatures down across the Low Countries – Belgium, the Netherlands, and Luxembourg – across Germany and into the Balkans. Some parts could see 50 to 70cm of snow in the process.

This bitterly cold Bora wind will then feed along the Adriatic Sea into Greece and Turkey, dumping heavy snow across the Taurus Mountains as another winter storm hits the eastern Mediterranean.

The other side of the Mediterranean will see temperatures in eastern Spain and southwest France approach the mid-to-high 20s Celsius (75 to 80F) over the next few days. These spring-like values, which are more typical in late March into April, will come less than two weeks after Storm Gloria battered the region with rain wind and snow.

While many have been enjoying the warmer weather, there are concerns that it is another example of climate change.

The UK Meteorological Office is predicting that 2020 will be another record temperature year with an expected increase in the global average temperature of 1.1 degrees. This increase is being caused by man-made global emissions. 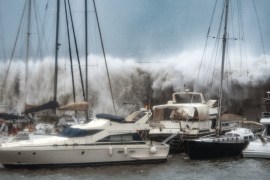 Powerful Storm Gloria now heading into southern France with torrential rains and snow in the mountains. 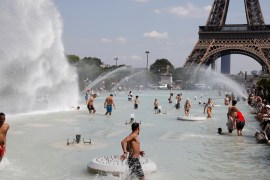 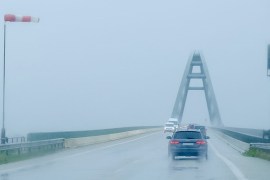 An icy shock for the continent as Arctic winds charge south.