Lai, a self-made multi-millionaire who has been a major financial patron of Hong Kong’s pro-democracy movement, was picked up by police at his house on Friday, Cable TV and TVB News reported.

Apple Daily, one of the publications under media company Next Digital of which Lai is non-executive chairman, said he was accused of participating in an illegal march on August 31.

Lai, Lee and Yeung could not be reached immediately for comment.

Hong Kong police said in a statement they would hold a media briefing on the arrests later on Friday. They did not give any further details.

The arrests come after a period of relative calm in the Asian financial hub following months of intense anti-government protests.

Hong Kong saw one of its worst clashes on August 31, with police firing tear gas and water cannon at pro-democracy protesters who threw petrol bombs.

Authorities in Hong Kong have arrested more than 7,000 people for their involvement in the protests, many on charges of rioting that can carry jail terms of up to 10 years. It is unclear how many are still in custody.

Public anger has grown over the months due to perceptions of China tightening its grip over the city. Beijing denies meddling and blames the West for fomenting unrest.

Lai was previously arrested in 2014 for refusing to leave a key pro-democracy protest site in the centre of the city.

Following his arrest, he resigned as editor in chief of Apple Daily. He has also come under scrutiny from Hong Kong’s anti-graft agency when they raided his home in 2014.

Hong Kong Democracy Council, a Washington based non- government organisation, said on Friday that the arrests were “blatant acts of political suppression by the Hong Kong government and the Chinese Communist Party”.

The group said in a statement it was demanding the immediate and unconditional release of Lai and the other pro-democracy activists.

Mark Simon, Lai’s top aide and a senior executive at Next Digital, said on Twitter that Lai, along with Lee and Yeung were “not in any way a flight risk. They need to be processed quickly and out of that police station as quickly as possible.” 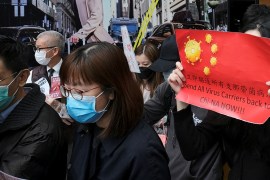 Strikers say a full border closure is the best way to reduce the risk of the new coronavirus spreading to Hong Kong. 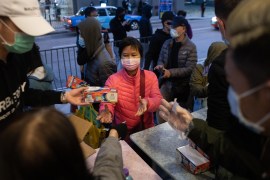 Coronavirus outbreak adding to tensions in a city where trust in government has evaporated and China has few friends.