Legislators voted 129 to 77 in favour of Fakhfakh’s team. Parliament in January rejected a proposed line-up by Habib Jemli, Fakhfakh’s predecessor and a nominee of the conservative Ennahdha party.

Under Tunisia’s 2014 constitution, the party with the most seats in Parliament is tasked with forming the country’s government.Ennahdha had emerged as the most powerful parliamentary force following legislative elections in October – but with just 52 of a total 217 seats, it alone could not guarantee Jemli’s inauguration.

That left President Kais Saied in charge of designating a new prime minister, with the former constitutional law professor giving Fakhfakh, a former tourism and finance minister, the difficult task of assembling the country’s next government.

The new government will have 32 members, a departure from Jemli’s 43-member strong technocratic cabinet. Ennahdha has been allocated six portfolios in the new configuration.

A self-described Muslim democratic party, Ennahdha initially said it would reject the proposed government of Saied’s apointee over its exclusion of some parties, including media magnate Nabil Karoui’s Heart of Tunisia.

After a minor reshuffle that did not include Heart of Tunisia, however, Ennahdha last week walked back on its initial position and said it would back Fakhfakh’s proposed government.

“All this has proved the strength of the Tunisian experience and its ability to manage discord in accordance with the constitution and away from populism and political tensions,” he told parliament.

The approval of Fakhfakh’s administration comes as cash-strapped Tunisia needs $3bn to cover government expenditure in 2020. Unemployment has remained stubbornly high throughout the past decade at 15 percent.

Economists at the International Monetary Fund (IMF) are waiting for the new cabinet members to assume office to begin negotiations on a new loan deal.

A previous deal to grant Tunisia $3bn was signed in 2016 in return for major concessions, including the floating of the Tunisian currency.

That resulted in a steep increase in the price of basic commodities, especially those imported from abroad, and slashed the purchasing power of ordinary Tunisians.

Some analysts have cast doubt over the government’s ability to strike a deal with international lenders, pointing to the governing coalition’s lack of ideological coherence including diverging views on issues such as the privatisation of state-owned enterprises and the implementation of further austerity measures.

“Participants in the alliance disagree on a host of issues,” Moez Zayoud, a Tunisian journalist, told Al Jazeera.

“This is so much so the case that I expect some members to vote against laws put forth by the government which they are supposed to be part of,” he said.

“On the economic front, parties like Ennahdha and the leftist People’s Movement – which holds 15 seats in parliament – are diametrically opposed. Despite being a ‘religious’ party, Ennahdha is fiscally liberal.”

It is on contentious issues relating to the economy that the government might find itself deadlocked in the future, said Zayoud, something which could then lead to the government’s collapse.

Coalition governments: A strength and weakness

This was not the first time that legislators in Tunisia voted for a coalition government.

In 2015, Ennahdha and Nidaa Tounes, the party of the late President Beji Caid Essebsi, agreed to join forces during a turbulent transition period.

But the Tunisian economy’s dismal performance over the following years led to big losses for both parties, with Ennahdha going from 69 seats in 2014 to 52 in last year’s parliamentary elections, and Nidaa Tounes plunging from 85 to a mere three, respectively.

Alex Martin, a lecturer of international relations at the University of Lincoln, said Tunisia was prone to having minority or coalition governments because of the nature of its electoral system.

“You have this proportional representation system that doesn’t produce any clear winner,” he said. “As a result, there is a need for these disparate groups to work together.”

Analysts say that while understandable in the tenuous regional context that followed the 2011 overthrow of Zine el-Abidine Ben Ali – especially for a group long stigmatised like Ennahdha – Tunisian parties’ propensity to enter coalition governments so far into a transition is proving harmful for democracy.

“The national unity government of 2015-2019 abandoned controversial but necessary issues like transitional justice and security sector reform and could not take bold action on the economy or on the formation of the constitutional court,” Sharan Grewal and Shadi Hamid, of the Brookings Institution, wrote recently.

“That the largest parties were in government together also meant that there was no effective opposition, which in turn contributed to public disillusionment with political parties and democracy.” 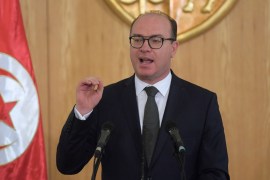 PM-designate forms coalition gov’t that will include Ennahda party in a deal that will prevent parliament dissolution. 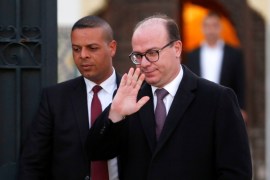 Tunisia talks on cabinet press on amid risk of new election

Elyes Fakhfakh announces a new government but it immediately hits hurdles after Ennahdha pulls out of lineup. 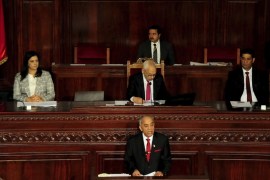