US Senator Bernie Sanders, the frontrunner for the Democratic Party presidential nomination, faced a torrent of attacks from his rivals on Tuesday night, during a high-stakes debate that could be their final prime-time opportunity to change the momentum of the campaign.

Billionaire businessman Michael Bloomberg seized on reports that Russia was interfering in the 2020 presidential election to help Sanders.

Bloomberg claimed both US President Donald Trump and Russia President Vladimir Putin shared the belief that Sanders would be the weakest Democratic rival for the Republican incumbent.

“Vladimir Putin thinks Donald Trump should be president of the United States and that’s why Russia is helping you get [in], so you lose to him,” Bloomberg said.

Sanders shot back, “Hey, Mr Putin, if I’m president of the United States, trust me you’re not going to interfere in any more American elections.'”

Last week, Sanders acknowledged that he had been briefed by intelligence officials who said that Russia is attempting to interfere in the elections to benefit him.

Sanders, who has risen to be the Democrats’ clear front-runner, responded: “I’m hearing my name mentioned a little bit tonight. I wonder why?”

The new wave of infighting came as Democrats met for the party’s 10th – and perhaps most consequential –  debate of the 2020 primary season.

Tuesday’s forum came just four days before the primary in the state of South Carolina, and one week before more than a dozen states vote during the so-called Super Tuesday primaries.

Biden is also looking to make a big impression in South Carolina, where he is counting on strong support among black voters in South Carolina to recharge his flagging campaign. His campaign had earlier said that a weak showing in the state could end his candidacy.

The state is the first contest featuring a substantial African-American electorate, a crucial voting bloc in the Democratic primary process.

A new Reuters Ipsos poll shows support for Biden slipping among black voters nationwide by 10 points in recent weeks, to 23 percent, while Sanders saw his support rise seven points to take the lead at 26 percent.

Sanders’s ideological ally, Elizabeth Warren, also made the case that she would be a better president than Sanders, but she trained most of her sharpest attacks on Bloomberg.

In one of the most tense moments of the debate, Warren denounced Bloomberg over a news report that he told a female employee to “kill it” when she became pregnant. The former New York City mayor denied the report.

Sanders’s handling of the pressure could be crucial in determining whether he stays at the top of the Democratic pack.

Whoever obtains the majority of delegates from all state primaries and caucuses will earn the nomination in the Democratic Party and the chance to defeat Trump in the November presidential election. 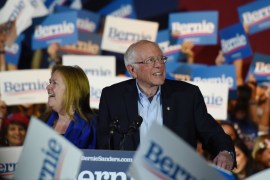 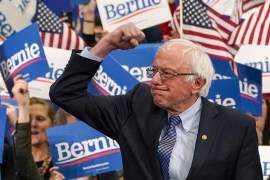 Bernie Sanders vs Bloomberg and the corporate media machine

Why is Bernie Sanders getting such a tough ride from US corporate media? Plus, the satirists mocking Angola’s elite. 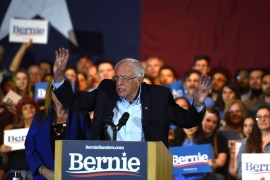 Mohammed bin Salman has put all his eggs in Trump’s basket, but what happens if the US leadership changes?