A ceasefire between the Palestinian Islamic Jihad group and Israel is holding in the Gaza Strip after two days of heavy fighting.

Following Egyptian and international mediation, the truce came into effect at 11:30pm (20:30 GMT) on Monday, Ihsan Ataya, a senior Islamic Jihad leader based in Lebanon, said in a press statement.

No projectiles were fired from the Gaza Strip overnight, a spokeswoman for the Israeli army confirmed.

The latest escalation began after Israeli soldiers on Sunday shot dead Mohammed al-Naim, a member of the Islamic Jihad’s armed wing, who was allegedly planting an explosive device at the heavily secured Israeli fence east of Khan Younis in the southern Gaza Strip.

In a graphic video that went viral, an Israeli bulldozer violently retrieved al-Naim’s body and it remains in the custody of Israeli forces.

Islamic Jihad responded by firing a barrage of rockets and mortar rounds at Israel, which prompted the military to strike Islamic Jihad targets in Syria, where some of the Iran-backed group’s leaders are based. Two more Islamic Jihad members were killed in an overnight air attack.

On Monday evening, Islamic Jihad declared a unilateral ceasefire. But Israel continued to attack targets in Gaza, resulting in the injury of at least eight Palestinians, Gaza’s health ministry said.

“The enemy did not commit itself into stopping its aggression,” said Abu Hamza, another Islamic Jihad spokesman.

Just before midnight, the ceasefire finally appeared to take hold.

“The al-Quds Brigades announces that it has ended its military response to the assassination crimes in Khan Younis and Damascus, and vows to continue its struggle against the occupation of our people and our land,” a statement from Islamic Jihad’s armed wing said.

life is back to normal after 2 days of tension. Schools are open wish the students good return pic.twitter.com/nRNe31w3hV

The Israeli army said Islamic Jihad launched 80 rockets by the time the ceasefire was announced, but more than 90 percent were intercepted.

Schools were closed in Israeli areas adjacent to Gaza, roads shut, and restrictions placed on outdoor public gatherings. The Israeli military said the restrictions would remain in effect on Tuesday.

The latest escalation came a week before an unprecedented third parliamentary election in Israel. It was the heaviest round of fighting since November when Israel and Islamic Jihad engaged in a two-day battle after Israel killed one of the group’s top commanders.

While the latest Israeli air attacks targeted only Islamic Jihad positions, Israel holds Gaza’s Hamas government responsible for all fire coming out of the coastal enclave.

Israel and Hamas have fought three wars and engaged in numerous skirmishes since Hamas’s takeover of the Gaza Strip in 2007, which resulted in Israel and Egypt imposing a crippling blockade on the coastal enclave. Yet in the past few months, Hamas has seemed more interested in easing the blockade and improving living conditions than fighting another war.

Islamic Jihad, meanwhile, has appeared relatively weak and disorganised in the past few months – acting more as a spoiler to diplomatic efforts than a serious military threat to Israel.

Still, Israeli Prime Minister Benjamin Netanyahu, who in the final days of a divisive election campaign, appeared reluctant to pick a fight with Hamas so close to next Monday’s election.

The election will be Israel’s third in less than a year after two inconclusive votes in 2019.

Netanyahu – locked in a tight race with former military commander and leader of the opposition Blue and White Party Benny Gantz – has tried to focus his campaign away from his upcoming trial on corruption charges by presenting himself as an experienced statesman who is best-suited to protect Israel’s security. Ongoing violence close to election day could disrupt the vote and embarrass Netanyahu.

Tamar Hermann, an expert on Israeli public opinion at the Israel Democracy Institute think-tank, said after so many previous rounds of fighting, she did not expect the latest violence to have an impact on voters.

“It’s expected and people are used to it, and resilience is not being eroded because of such ‘normal events’,” she said. 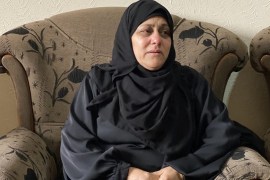 Outrage after Israeli forces use bulldozer to retrieve body of man they accused of planting improvised explosive device. 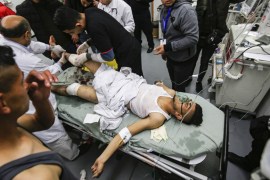