Spain’s airport operator AENA has suspended all flights in and out of Gran Canaria and all flights leaving Tenerife, according to Reuters news agency, after clouds of red sand from the Sahara overwhelmed the northern Canary Islands, severely reducing visibility.

Spain’s national weather service warned on Saturday evening that winds of up to 120km/h (75 mph) are likely to buffet the Canaries until Monday. Gran Canaria, Fuerteventura and Lanzarote are likely to be the hardest hit.

The government of the Canary Islands has recommended that people who suffer from chronic respiratory diseases not go out without medication and advised people to keep their doors and windows closed across the archipelago. Authorities in Lanzarote’s capital, Arrecife, cancelled all outdoor activities, including some carnival celebrations.

This weather event is known as the “Calima” and is a burst of dust-filled wind originating over the Sahara. When strong enough, it blows out of Morocco or Western Sahara to cover some or all of the Canary Islands. It can also be a warm wind and this event has already lifted the temperature on Gran Canaria. 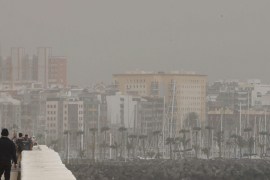 The islands have been hit with poor visibility as a result of Saharan dust.