South Sudan’s warring parties have once again declared an official end to the country’s brutal civil war that killed an estimated 400,000 people and displaced millions of others over the past six years.

On Saturday, President Salva Kiir swore in opposition leader Riek Machar as his first deputy, narrowly meeting a twice delayed deadline to form a transitional coalition government as part of a power-sharing agreement signed in September 2018. Three other vice presidents were also sworn in – two from the government and one from the opposition – and a fifth from another opposition group is expected to be announced in the coming days.

The transitional government will lead the country to elections in three years.

Addressing the nation from the capital, Juba, Kiir urged the population to forgive one another like he and Machar did and assured the country that peace was now “irreversible”.

“It is no longer in the corner or on the way,” he said on Saturday. “Peace is here in Juba and it will spread to all corners of our country.”

This is the bitter rivals’ latest attempt at peace since fighting erupted between forces loyal to Kiir and troops supporting Machar in 2013, two years after South Sudan gained independence from Sudan.

Countless ceasefires have since been violated and a 2015 peace deal collapsed when renewed clashes broke out the next year, forcing Machar to flee the country on foot. While fighting largely subsided over the past year, the implementation of the 2018 agreement has been sluggish and fraught with a lack of funding and questionable political will. Two deadlines, in May and November, were missed due to unresolved key issues, including security arrangements and an agreement on the number of states.

On Saturday, reactions among locals towards the new government were mixed.

“The nation was fragmented along tribal lines and their coming together … is a key step towards uniting the country,” said John Garang, a Juba resident.

But Ayuel Chan, a local journalist with the state-owned South Sudan Broadcast Corporation, was more sceptical. “Unless something drastic happens, there will [be] little change in the status quo,” he said, striking a pessimistic tone over a scenario in which longtime government officials with a poor track record, including some who have held office since pre-independence, were re-elected.

While South Sudan observers are lauding Saturday’s step as an important landmark, concerns linger over potential “deadlock and dysfunction” in the new government as well as a number of outstanding issues, Alan Boswell, a senior analyst at the International Crisis Group, told Al Jazeera.

Security arrangements in particular are “a total mess”, he said.

The failure of the previous peace deal is largely attributed to inadequate security arrangements.

As part of the latest peace deal, a unified force of at least 41,500 troops of opposition and government soldiers needed to unify into one national army, but that has not been realised.

Both parties agreed that security will be provided by the president for Machar and all other signatories, said government spokesman Ateny Wek Ateny.

Yet opposition spokesman Mabior Garang de Mabior told Al Jazeera they are “seeking assurances in writing” that the president will be able to guarantee the security of the various opposition groups in Juba.

Then there is the contentious issue of the number of states. Last week, in a major concession Kiir described as “painful”, the government agreed to revert the country to 10 states instead of 32, which it established in 2015, in what many South Sudan analysts saw as an attempt to gerrymander the country along ethnic lines. But in the same statement last week, Kiir also announced the creation of three administrative areas, which Machar said he would not accept.

Dan Sullivan, a senior advocate for human rights at Refugees International, welcomed the return to 10 states but cautioned it “will no doubt create new challenges, including tensions over the loss of government positions, newly unresolved borders and the fate of three administrative areas that remain under dispute”.

Even if these issues are overcome, years of war have left the country in shambles, entrenched in corruption and human rights atrocities committed with impunity.

The report found that government officials were implicated in the “pillaging of public funds”, while millions of dollars were diverted from the National Revenue Authority depleting resources that could have been used to help millions of vulnerable people.

“The plundering of the public purse by officials is having a catastrophic impact on the humanitarian situation,” the commission said in a statement.

Hospitals in Juba are often without electricity and staff go without regular pay, said Alexander Dimiti, director general of reproductive health. Seated in his office in the dark, Banak Joshua, the director of the Ministry of Humanitarian Affairs and Disaster Management, the body charged with helping the country’s 1.4 million internally displaced people, said the ministry often does not have enough money to buy fuel to power the generators.

Recent flooding affecting almost one million people and an incoming locust invasion are exacerbating the dire situation, in particular the food crisis.

The International Rescue Committee is seeing “too many malnourished children” in its clinics, said Celin Bore, the organisation’s deputy director of programmes in South Sudan, calling on the government to ramp up efforts and ensure humanitarians have access to areas previously unreachable due to violence.

The formation of the transitional government followed intense pressure from the international community and foreign donors, who have been providing the bulk of South Sudan’s humanitarian needs.

“The international community is sick and tired and fed up with providing the government services that the government of South Sudan should be providing for its own people,” Tibor Nagy, the United States assistant secretary of state for African affairs, said in a conference call in January.

Moving forward, South Sudan observers are looking for a change.

While an important test will be if Kiir and Machar can coexist peacefully, the real gauge will be whether the  millions of refugees and internally displaced people feel confident enough to return, voluntarily and resettle in their homes, said Lauren Blanchard, an analyst with the US Congress.

“Many eyes will be on Juba, but it will be important to monitor how this peace deal is implemented beyond the capital, and in the areas hardest hit by the conflict,” she said.

But notable change will take time.

“Ending a war is one thing,” said Boswell, from the Crisis Group. “Piecing South Sudan back together and repairing the damage of this war will take generations.” 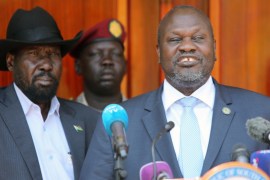 Opposition leader Riek Machar was sworn in on Saturday as the deputy of President Salva Kiir. 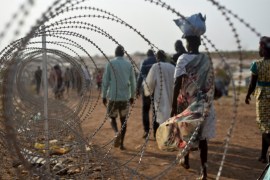 Civilians denied access to aid by the country’s warring parties, according to a new UN Human Rights Commission report.