Bangkok, Thailand – Thailand‘s Constitutional Court is set to issue on Friday its verdict on an electoral case that could lead to the possible dissolution of the country’s third-largest political bloc – an outcome that could push the country into another round of unrest.

The Future Forward Party (FFP) and its leader, Thanathorn Juangroongruangkit, are accused of breaking election finance laws when he reportedly loaned 191.2 million-baht ($6.06m) to his party during the campaign last year.

In December, Thailand’s Election Commission (EC) had filed a request to dissolve FFP about the legality of the loan.

Thanathorn, an auto-parts billionaire-turned-politician admitted to loaning the money to finance political activities. But he maintained that the country’s electoral law allows such a loan contract.

Since its establishment two years ago and following its strong showing during the March 2019 parliamentary elections, the FFP and Thanathorn have come under fire from the current government of Prime Minister Prayuth Chan-ocha.

FFP has at least 76 parliamentary members in the 500-seat legislative body of Thailand. In the race for prime minister in 2019, Thanathorn had challenged Prayuth, a former general and leader of the 2014 coup.

In January, the party narrowly escaped a separate attempt at disbandment, after being acquitted of trying to overthrow the monarchy – allegations that FFP and Thanathorn have strongly denied.

The party is also accused of being anti-military, for supporting policies against forced conscription, among other allegations. To date, it has faced at least 28 legal challenges.

In November, the same Constitutional Court stipped Thanathorn of his MP status, after finding him guilty of violating the election law, by owning shares in a media company during the campaign season. He has denied the charge saying he had transferred the ownership of the shares before the election.

‘The struggle will continue’

In an interview with Southeast Asia Globe earlier this week, Thanathorn declared that he and his party are innocent of the charges, adding that they will continue the fight they will get an unfavourable verdict.

“The loan has a clear contract – I’m not giving this money for free to the party,” he said, adding that he has been transparent about his campaign.

“If we’re found guilty of this and our party is dissolved, the struggle will continue. Our MPs will be moved to a new house, a new political party that has been pre-arranged.”

Although it is not unheard of for party leaders to loan large sums of money to their own campaigns, the election commission is adamant that Thanathorn broke the law.

Political observers speculate that if the party is dissolved, supporters could mobilise online and on the streets, with many of the young party loyalists active on social media.

“It used to be the Thaksin party machine that gets dissolved. But now it’s Thanathorn and his Future Forward Party,” he said referring to former Prime Minister Thaksin Shinawatra, whose term was also dominated by political clashes.

Thitinan predicted that the FFP “would be significantly weaker” if it is ordered dissolved, as some parliament members might switch camp, “diluting its brand” under a new banner.

“But I think the party as a political movement will grow because of the forces of history in favour of popular rule and of vested interests in younger people wanting a say for their own future.”

Supporters of FFP are now left wondering if the legal battles will ever come to an end. Many are doubtful that the party will overcome its latest political hurdle.

“If FFP is dissolved, I will surely be disappointed by the unfairness of every participant who makes this happen,” said Boss, a software engineer living in Bangkok.

“However, it is not a big surprise for me if something happens to FFP [today] because I know that it will end like this,” he said.

“Personally, I support every political party who fight for democracy and equality. The main reason that I support FFP is because they fight against dictatorship even though they might be attacked in many ways,” he added. 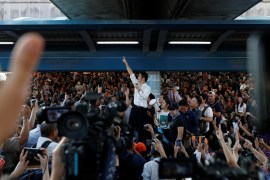 Major show of support in Bangkok for Future Forward Party, facing the threat of dissolution. 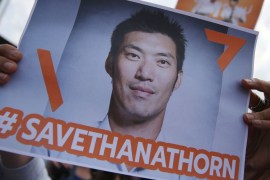 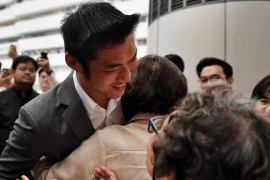