The head of Libya‘s internationally recognised government has said attacks on the capital by eastern forces have overtaken United Nations-brokered ceasefire negotiations, dampening hopes of a quickly revival of the talks following his side’s withdrawal.

The UN Support Mission in Libya (UNSMIL) on Wednesday condemned the attack on the port, saying it could have led to a “real catastrophe” had a nearby vessel transporting liquified gas been hit, but added it hoped the talks could resume.

“The Mission calls for an end to the escalation and provocative actions, especially expansion of the conflict area, and urges all parties to resort to dialogue as the only means to end the crisis,” it said.

Ghassan Salame, head of the UN Libya mission, had on Tuesday launched a second round of talks in Geneva, with five senior officers from the GNA and five appointed by Haftar’s self-styled Libyan National Army (LNA) taking part.

The LNA launched a military offensive in April last year aimed at seizing Tripoli. It has so far failed to breach the GNA’s defences amid fierce fighting that has killed more than 1,000 people and displaced some 140,000.

The port strike was the latest violation of a tenuous truce that came into effect on January 12, brokered by Russia, which supports Haftar, and Turkey, which backs the GNA.

During a visit to the shelled port, a defiant al-Sarraj on Wednesday rebuffed calls for an immediate return to the negotiating table.

“There must be first a strong signal from all international players who are trying to talk to us,” he told reporters, saying this also applied to parallel discussions focused on political and economic issues.

He suggested fighting was likely to continue: “We have an even stronger signal than that, which is defending our people.”

The GNA said in a statement late on Tuesday that without a lasting ceasefire, “negotiations make no sense”.

“There can be no peace under the bombing,” it added. “It is clear the objective of the systematic bombardments of the residential areas, the airport and the port, in addition to the total blockage of the oil installations, is to provoke crises for the citizens in all the aspects of their life.”

It continued that Haftar’s forces were “trying in vain” to destabilise the state, having failed to seize power.

The joint military commission tasked with negotiating in Geneva was set up after a January 19 conference in Berlin, where international leaders promised to uphold a UN arms embargo, enable a peace process and end outside interference and military support for fighting factions. Still, little has changed on the ground since.

“Delegations are still here (in Geneva) and Dr Salame has a meeting today with the head of the GNA delegation,” said Jean El Alam, a UNSMIL spokesman.

Reporting from the Swiss city, Al Jazeera’s James Bays said the UN is trying to “pick up the pieces of this peace process”.

“The UN [is] working very hard,” Bays said, adding that it was likely that Salame was also “trying to engage international actors” in the efforts to revive the negotiations.

“Last week, there was a resolution from the UN Security Council pushing this process and only a couple of days ago in Munich, foreign ministers from all the key international players were saying that these talks were the way forward – and that included countries that are supportive of both sides in the Libyan conflict.”

Further talks were planned to start in Geneva on February 26 on finding a political solution.

Meanwhile on Wednesday, Russian Defence Minister Sergei Shoigu met Haftar for talks on resolving the conflict, the defence ministry in Moscow said in a statement.

Shoigu and Haftar discussed the situation in Libya and “the important role of talks” held in the Russian capital last month, as well as “the need to fulfil” terms agreed at the Berlin summit, it added.

Libya has been in turmoil since a 2011 NATO-backed uprising killed longtime dictator Muammar Gaddafi, with rival armed factions still vying for power. 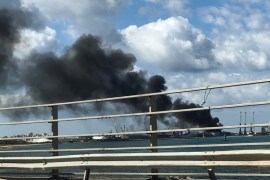 Turkey denies ships carrying arms were in Tripoli port after rocket barrage led gov’t to pull out of UN-brokered talks. 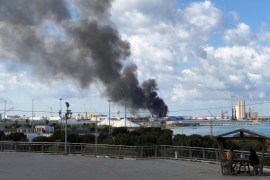 Internationally recognised gov’t pulls out of UN-brokered talks in Geneva after Haftar’s forces hit port in the capital.