The UN body said it identified 112 business entities – 94 based in Israel and 18 in six other countries – which it has reasonable grounds to conclude have ties with Israeli settlements, which are considered illegal under international law.

It identified companies listed in the United States, France, the Netherlands, Luxembourg, Thailand and the United Kingdom. Among these was the US-based home-sharing company, Airbnb.

UN High Commissioner for Human Rights Michelle Bachelet said the findings had been subject to an “extensive and meticulous review process” and the report “reflects the serious consideration that has been given to this unprecedented and highly complex mandate”.

Her office said the report “does not provide a legal characterisation of the activities in question, or of business enterprises’ involvement in them”. 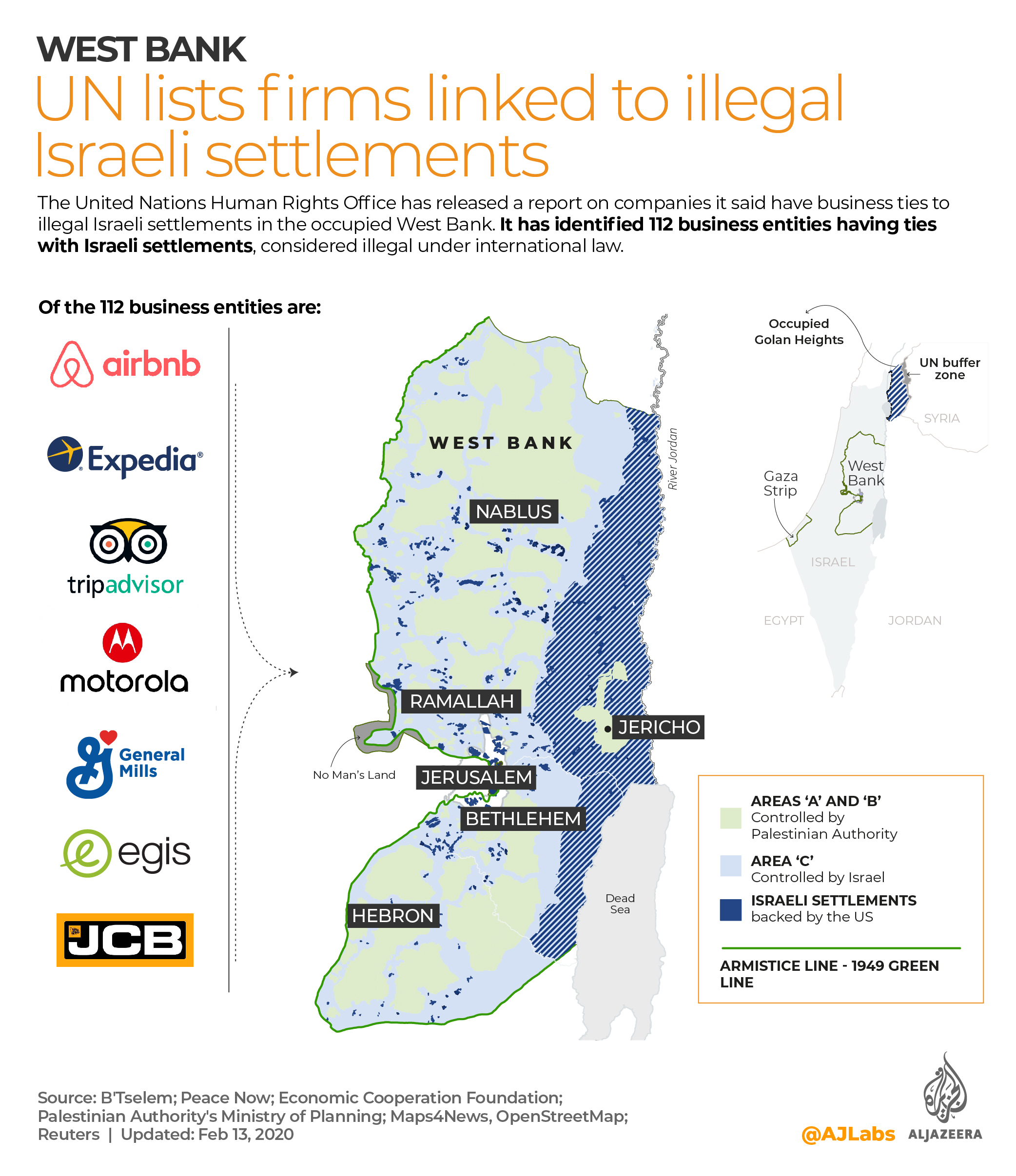 Barghouti told Al Jazeera that the report will reinvigorate the international movement Boycott, Divestment and Sanction or BDS and its allies who seek to boycott companies and businesses who are deemed violating international law by operating in the occupied Palestinian territories.

“This report will have a very big impact because it will encourage Palestinians and others around the world to increase their boycott of these companies,” he said.

The Palestinian leader called on international institutions to stop investing in companies working in Israeli settlements in the occupied West Bank.

The BDS was launched in 2005 by Palestinian civil society organisations calling for the international community to boycott, divest from, and sanction Israel. The movement is inspired bythe struggles decades ago to end apartheid in South Africa.

Israeli Foreign Minister Israel Katz said he ordered an “exceptional and harsh measures” against the UN body in the wake of the much-delayed report.

Palestinian leader and head of Civil Affairs Authority Hussein al-Shaikh said in a tweet that the US and Israel are “challenging the international consensus” and are using intimidation tools” against the UN human rights agency.

The UN list comes less than a month after Trump administration unveiled its Middle East plan that supported the legalisation of the Israeli occupation of Palestinianlands and annexation of large swathes of the West Bank.

Legal experts believe the listing can be used in strategic litigation against companies identified in the report.

Professor Kevin Jon Heller, who teaches international law at the University of Amsterdam and Australian National University, said he does not believe the report itself can function as grounds for domestic legal action against the companies at this point.

“Any legal action against one of the corporations in a domestic court would still require proof that the corporation’s activities were illegal under domestic law,” he said.

He, however, said the report is “a helpful tool for focusing strategic litigation on the corporations identified in it”.

Israel occupied the West Bank, Gaza Strip and East Jerusalem following the 1967 war and has since built hundreds of illegal settlements for its Jewish citizens throughout the occupied Palestinian territories.

There are more than 750,000 illegal Israeli settlers currently in the West Bank and East Jerusalem, according to Palestinian officials.

Israel and the Palestinians signed the Oslo Accord in 1993 that stipulated a two-state solution – the idea of Israel and Palestine living side-by-side – based on the 1967 lines.

Decades after Oslo, however, Israel has built more Jewish settlements and confiscated more Palestinian lands effectively killing the agreement and ending any Palestinian hopes of establishing their desired state.

“The report is a much-needed tool towards denying Israeli and international companies from benefitting from occupying Palestinian lands,” said Barghouti, the Palestinian leader.