New Delhi, India – India’s army chief Manoj Mukund Naravane has embarked on an “historic” six-day visit to the United Arab Emirates (UAE) and Saudi Arabia, the first such visit to the two Gulf countries by the head of the military.

The visit by General Naravane, Chief of Army Staff (COAS), is aimed at “strengthening the country’s strategic and defence cooperation” with the two nations, a statement from the Indian army said on Tuesday, adding that it is an “historic” trip.

India has had historically close economic ties with Gulf nations, as it imports a significant part of its petroleum products from the region.

Saudi Arabia is India’s fourth-largest trading partner after China, the United States and Japan, and a leading source of energy. India imports around 18 per cent of its crude oil requirement from the country.

But in the last few years, the government of Prime Minister Narendra Modi has focused on boosting security and defence ties, particularly with the UAE.

“The visit of the army chief to the UAE and Saudi Arabia is in line with New Delhi’s new-found desire to expand its security partnerships with these two countries in particular and the neighbourhood in general,” Happymon Jacob, associate professor of International Studies at New Delhi’s Jawaharlal Nehru University, told Al Jazeera.

“The decision to have the army chief, rather than the CDS (chief of defence staff) or the NSA (national security adviser), make these visits is intriguing, though,” said Jacob, who is also the author of book Line on Fire: Ceasefire Violations and India-Pakistan Escalation Dynamics.

8.5 million Indian workers in the Gulf

The Gulf region is also home to 8.5 million Indian workers, with more than 2.7 million living in Saudi Arabia and nearly 30 percent of the UAE’s total population comprising Indians.

In recent years, the UAE and Saudi Arabia, which have traditionally maintained close military ties with India’s archrival Pakistan, have been warming to New Delhi.

The two countries have conferred their respective highest civilian awards on Modi – symbolising the eagerness on their part to do business with New Delhi.

The UAE and Saudi Arabia are building a massive $42bn petrochemical plant in the Indian state of Maharashtra as they see India as a major consumer of energy.

Rights activists, however, have criticised Abu Dhabi and Riyadh for honouring Modi, who has been accused of marginalising India’s Muslims, the country’s largest minority.

Saudi Arabia and the UAE have maintained silence on the issue of Kashmir, angering Islamabad. Last month, the UAE stopped issuing work and tourist visas to people from 13 countries, including Pakistan.

Michael Kugelman, deputy director of the Asia programme at the US-based Wilson Center, said the signs of a deepening India-Saudi Arabia partnership have been on display for quite some time.

“For India, it’s part of an effort to increase its partners in the Middle East, especially for energy cooperation in a period when it has cut back imports from Iran due to the US sanctions regime,” Kugelman said.

He added that the Saudi-Iranian rivalry is worsening rapidly, and especially after this new trend of several Gulf Arab states recognising Israel.

“It makes sense that Riyadh would want to bring New Delhi, which has a growing relationship with Israel, closer to its side,” he added. 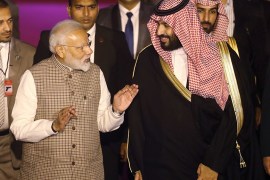 Prime Minister Narendra Modi announced the plans while at an investor summit in Riyadh. 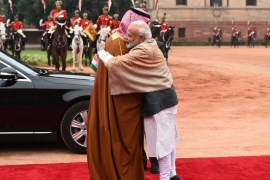 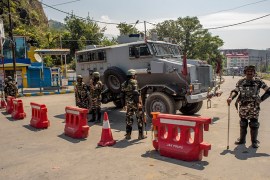 Why have Saudi Arabia, UAE failed to condemn India over Kashmir?

The Gulf heavyweights have not sided with Pakistan, and analysts say it’s because of India’s growing economic clout. 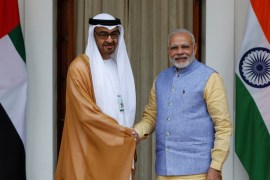