Ethiopia’s government has admitted federal troops fired at and detained United Nations workers in the conflict-hit Tigray region, blaming the team for trying to reach areas where “they were not supposed to go.”

The comments by Redwan Hussein, spokesman for the Ethiopian government’s task force for Tigray, came as humanitarian agencies on Tuesday reiterated urgent calls for immediate access to the northern region, warning of an “increasingly critical” situation more than a week after the UN announced a deal with the government to allow in desperately needed food and other aid.

Redwan told reporters the UN staffers “broke” two checkpoints and were trying to go through a third when they were fired upon. He said the staffers have since been released.

In New York, UN spokesman Stephane Dujarric said there were four people in the convoy. “They were trying to kind of do an assessment of of roads before, obviously, and this needs to be done before a larger UN aid convoys go in.”

Since then, aid-laden lorries have waited at the borders of Tigray, a region of six million people, even as warnings have become increasingly dire about the lack of food, fuel, clean water, cash and other necessities.

Abiy declared victory in Tigray on November 28 after the army seized the regional capital, Mekelle. On Monday, however, he said efforts were continuing to restore order, amid continued fighting and lawlessness that is hampering relief efforts.

“Regaining access to refugees and others in need is urgent and critical,” the head of the UN’s refugee agency (UNHCR), Filippo Grandi, tweeted on Tuesday.

Yesterday’s statement by @PMEthiopia says that protection and assistance will be given to those impacted by military action in #Tigray including Eritrean refugees.

Regaining access to refugees and others in need is urgent and critical for UNHCR and humanitarian organizations.

In Geneva, UNHCR spokesman Babar Baloch told reporters it was “very hard” to establish what is happening inside Tigray, where communications have been shut and access restricted since the start of the fighting.

Some 96,000 Eritrean refugees, many of whom have fled neighbouring Eritrea’s authoritarian government, were living in four camps in Tigray. Eritreans often leave to escape mandatory, indefinite military service and repression, or search for better opportunities out of what has long been one of the world’s most isolated countries.

The UN security team that was fired at on Sunday was seeking access to the Shimelba camp for Eritrean refugees.

Redwan Hussein, spokesman for the Ethiopian government’s task force for Tigray, told reporters that the UN team passed through two checkpoints without stopping while driving hastily to an unauthorized area.

“When they were about to break the third one they were shot at and detained,” he said.

The UNHCR has had no humanitarian access to the camps since the start of the unrest and it is thought that stocks delivered beforehand would now have run out.

Speaking to Al Jazeera last week, Baloch had said there “worrying reports of attacks, of abductions and also of recruitments in and around these refugee camps”. On Tuesday, he said there were reports that some of those Eritrean refugees may now be on the move inside Tigray.

“Our hope is that once we get the direly needed access to the region, we will be able to assess people and see what has happened,” he said. “This is an issue of great worry for us.”

An Eritrean who lives in Ethiopia’s capital, Addis Ababa, told Al Jazeera last month the camps were in “big trouble”.

Even before the conflict, people there were complaining about poor services, and a lack of food or electricity, which led many refugees in Tigray to move to cities to try and find work.

Abiy and Eritrea’s President Isaias Afwerki signed a peace pact ending two decades of hostilities in 2018, which led to the Ethiopian prime minister winning last year’s Nobel Peace Prize. The TPLF has accused the forces of longtime foe Isaias of joining the conflict on the side of the Ethiopian federal troops and has fired rockets across the border into Asmara. Both Ethiopia and Eritrea deny Eritrean involvement in the fighting.

On Tuesday, Reuters news agency cited a United States government source and five regional diplomats as saying that Washington believed that Eritrean soldiers had crossed into Ethiopia and joined the war.

Separately on Tuesday, the head of the Norwegian Refugee Council, Jan Egeland, said his organisation is “deeply concerned to find that humanitarian access to the region is still significantly constrained”.

He added: “These people can no longer be made to wait. Aid must not be left at a standstill. We have been standing ready to deliver food, emergency shelter and other essential materials for weeks, and we expected this deal to clear the way.”

The UN announced the deal with Ethiopia’s government last Wednesday, saying it was signed on November 29. The agreement allows access only to areas under Ethiopian government control but even those areas are apparently not yet open.

Abiy’s office said on Monday it was working with the UN and others to extend humanitarian assistance “with a well-coordinated framework led by the federal government”.

“The agreement we entered with the UN was in the belief that the UN would coordinate with us but the government would call the shots,” Redwan said on Tuesday, stressing that Ethiopia was capable of helping its own people.

He also said the government would investigate any reports of atrocities or mass killings and allow independent probes if needed. “Ethiopia is being run by a strong functional government,” he added. “It doesn’t need a babysitter.”

The UN, however, has stressed the importance of a humanitarian approach that is neutral and unfettered.

The fighting is estimated to have killed thousands of people and sent at least 49,000 refugees fleeing to neighbouring Sudan.

The number of daily arrivals in Sudan typically fluctuates between around 400 and 700.

“There are concerns about refugees who want to leave and flee and seek safety in Sudan and may have been prevented. Refugees who are arriving are reporting an increasing number of checkpoints,” said Baloch. “Many of them have been hoping that if peace is established they will be able to go back home.”

The TPLF dominated Ethiopia’s government and military for nearly three decades until being sidelined after Abiy took office in 2018.

The prime minister has rejected the idea of dialogue with the TPLF. Both sides are heavily armed, leading to fears of a drawn-out conflict that would destabilise Africa’s second-most populous country and the wider Horn of Africa region. 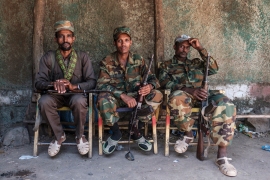 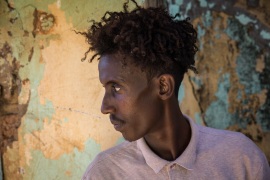 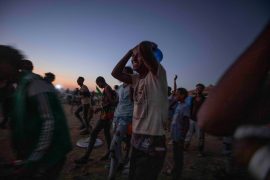