Turnout was low with 69 percent abstaining.

The win gives Maduro control of the last chief branch of government outside his grasp.

“We have recovered the National Assembly with the majority vote of the Venezuelan people,” Maduro said in a televised address. “It’s a great victory without a doubt for democracy.”

The National Assembly had been led by the United States-backed politician Juan Guaido, who has pressed to overthrow Maduro for nearly two years.

In a news conference on Monday, Guaido said that the boycotting of the election was “a rejection of the dictatorship,” and called on his supporters to participate in a December 12 consultation that will ask citizens whether they reject the results and want a change of government.

“They have imprisoned us, they have tortured us and they have assassinated us, but here we are and here we will be until we see our Venezuela lead to a free, democratic country without dictatorship,” he said.

Translation: Rejection of this regime and its fraud unites us, now we must take it to the streets. On December 12 we, like the vast majority of us who want to choose their future, will mobilise.

The election, contested by about 14,000 candidates from more than 100 parties, comes with the country in a deep political and economic crisis – suffocated by runaway inflation, paralysed in endless queues for petrol, lacking water and gas supplies and afflicted by sudden power cuts.

Since November 2019, inflation has reached 4,000 percent. More than five million people have fled the country in recent years, the world’s largest migration after that of war-torn Syria.

The International Monetary Fund projects a 25-percent decline this year in Venezuela’s gross domestic product or GDP, while hyperinflation diminishes the value of its currency, the bolivar, now worth less than a millionth of a dollar on the free market.

Venezuela has also been hard-hit by the COVID-19 pandemic and voters were required to wear masks inside polling stations, where the floors bore markings to ensure social distancing was maintained.

Guaido, 37, swore to remove 58-year-old Maduro early last year – basing his claim to the interim presidency on his leadership of the National Assembly, whose term legally ends in early January under the constitution.

The US, which has been leading the pressure to remove Maduro with economic sanctions, including an oil embargo in force since April 2019, refused to recognise Sunday’s vote.

“What’s happening today is a fraud and a sham, not an election,” US Secretary of State Mike Pompeo wrote on Twitter.

Venezuela's electoral fraud has already been committed. The results announced by the illegitimate Maduro regime will not reflect the will of the Venezuelan people. What's happening today is a fraud and a sham, not an election.

On Monday, the European Union also said it did not consider Venezuela’s parliamentary election as free or fair and rejected the result, calling on Maduro to chart a path towards national reconciliation.

“The results cannot be recognised by the European Union,” the EU’s top diplomat, Josep Borrell, told a news conference, reading out a joint statement by EU foreign ministers who endorsed a formal position rejecting the vote’s outcome.

“The European Union (foreign) ministers unanimously agreed on an assessment that says that this election failed to comply with the minimum international standards, they failed to mobilise the Venezuelan people to participate,” Borrell said.

Maduro, the hand-picked successor to the late President Hugo Chavez, won a second term in 2018. But dozens of nations allied with the US reject his legitimacy, alleging the vote was rigged and his most popular challengers were banned. 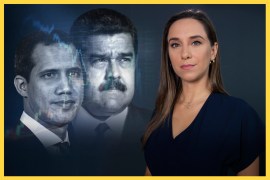 How did Venezuela end up with two presidents? | Start Here

Why does Venezuela have two competing presidents? And will parliamentary elections only make things worse? 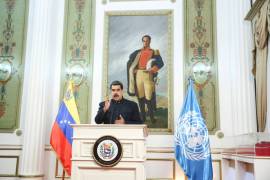 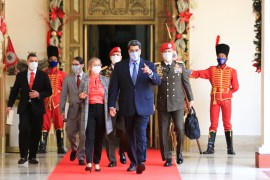 Maduro hopes to resume ‘decent’ dialogue with US after Biden win