Monrovia, Liberia – Liberians will vote in key midterm elections on Tuesday, in which half of the Senate’s 30 seats will be contested, as well as a divisive constitutional referendum.

The senatorial elections will serve as an important gauge of the current level of support for President George Weah and his Coalition for Democratic Change (CDC) as he approaches the halfway point in his first six-year term in office.

But they will also be equally important for the opposition, which recently unified under the umbrella of the Collaborating Political Parties coalition (CPP), indicating the level of its preparedness to provide a credible alternative to the CDC in the 2023 presidential vote.

The most high-stake seat in Tuesday’s polls is Montserrado County, which includes the capital, Monrovia, and contains about a third of Liberia’s registered voters.

The seat was taken away from the CDC in a by-election in July 2019 by the CPP’s Abraham Darius Dillon, who has become one of the most vocal critics of the Weah administration.

On Sunday, thousands of citizens, many of them carrying torches and lamps, took to the streets of Monrovia in a show of support for Dillon.

The CPP candidate has been dubbed “The Light” by his supporters for his drive for transparency and accountability, at a time when Weah’s administration has been implicated in scandals ranging from petrol supplies disappearing from state-run storage facilities to the questionably executed infusion of $25m into the economy to “mop up” excess local currency.

“Dillon has exposed everything that’s been going on in the Senate,” said drinks vendor Cecelia Pittman, 30. “The salaries they receive, he exposed that. We didn’t know how much the lawmakers were making.”

“The CDC wants Montserrado at all costs and has deployed so many resources,” said Ibrahim Nyei, a political analyst and doctoral student at the University of London’s School of Oriental and African Studies, referring to videos circulating on social media which appear to show Fallah distributing cash to potential voters.

Monrovia’s thoroughfares are adorned with billboards picturing Fallah and Weah, while Dillon’s face is noticeably absent.

Much of the funding for the CPP candidate’s more modest campaign came through donations to a “Dollar for Dillon” crowdfunding initiative – an unprecedented move for a legislative candidate, according to Nyei.

“I’m going to be voting for Thomas Fallah because I want George Weah’s agenda to go through,” said Augustine Gaye, 40, who earns a living by driving a rickshaw, known locally as a kekeh.

“We want to pass bills to develop the country and build roads, which is the government’s objective.”

Street vendor Emmanuel Weah, 30, pointed to Fallah’s track record as a representative: “We’ve seen a lot of development in his district like roads and colleges that he can bring to the whole of Montserrado.”

However, some Weah supporters consider it important to have a strong opposition voice in the Senate.

“I’m a CDC-ian but I don’t vote CDC for one and all,” said Lorpu Sesay, 35, who is unemployed. “I’m going to vote for Dillon because he tells us what we need to know.”

Another Weah supporter who plans to back the CPP is second-hand clothes vendor Rashin Wesseh: “I’m voting for the opposition because I need a strong opposition in the House to tell me whether my party is telling the truth or lies,” the 30-year-old said, as he peddled jeans on a busy street corner in downtown Monrovia.

Held alongside the senatorial polls will be the constitutional referendum. Initiated during the era of former President Ellen Johnson Sirleaf, it entails eight proposed modifications to the constitution including legalising dual citizenship in a bid to encourage investment from members of the Liberian diaspora.

Other changes include shortening presidential terms, an amendment some government critics fear Weah will exploit to prolong his stay in office.

While the president is encouraging citizens to vote in favour of all clauses, the opposition contests that there has been insufficient information about the proposed changes and is therefore calling on Liberians to reject them.

“I will vote all ‘No’ in the referendum,” said 29-year-old Jenneh Jallah, who works in the administration department at the Ministry of Health.

“There was no education given to the citizens. We who can read and write don’t even understand it, so how will the people in the interior look at it?”

The main parties have urged supporters to ensure a peaceful election. However, on Saturday two vehicles belonging to a campaigning CPP candidate were set alight in Grand Cape Mount County, along with the house of an opposition representative.

“Things are on tenterhooks,” said Nyei.

“There could be clashes on the streets if overzealous supporters declare an early victory. But if leaders call on their voters to stay at home and abide by the law, that will go a long way in ensuring a peaceful outcome.” 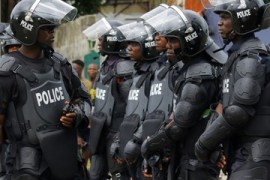 Many people are unhappy with the economy and the rising cost of living. 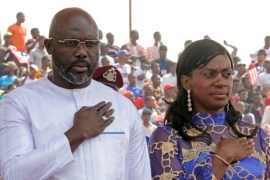 Critics say Liberia’s economy has worsened because of Weah government’s incompetence and failure to address corruption. 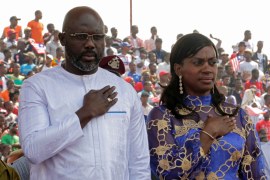 Liberia’s elections next week will be a referendum on the ruling party.