Venezuelans voted on Sunday in legislative elections set to tighten President Nicolas Maduro’s grip on power and weaken his US-backed rival, Juan Guaido, who is leading a boycott of the polls he calls a fraud.

Victory will give Maduro’s governing Socialist Party control of an expanded 227-seat National Assembly – the only institution not in its hands.

The election, contested by about 14,000 candidates from more than 100 parties, comes with the country in a deep political and economic crisis – suffocated by runaway inflation, paralysed in endless queues for petrol, lacking water and gas supplies, and afflicted by sudden power cuts.

“The time has come to vote for peace, for the country, for the future,” Maduro said in a message to supporters on the Telegram messaging application, shortly before voting began at 6:30am local time (10:30 GMT).

Guaido, 37, called for a boycott on grounds that “free and fair” conditions for holding elections do not exist.

“Maduro’s objective isn’t even to gain legitimacy,” he told the AFP news agency in an interview last week, adding the goal was instead to simply wipe out all semblance of democracy.

Guaido and his allies plan a week-long plebiscite from Monday seeking public support to prolong the mandate of the current National Assembly until “free, verifiable and transparent” elections can be held.

“This is a very important election in Venezuela,” Andreina Tarazon, a Venezuelan politician from the United Socialist Party of Venezuela (PSUV) and president of the Centre for Higher Studies of Development and Emerging Economies, said.

“Until now the [assembly] which has been managed by the opposition has brought deep problems to the country, especially in the management of its economy, and its international relationships.”

In opposition control since 2016, the legislature has prevented Maduro from securing more foreign investment for the country’s oil industry.

The European Union, the US and several other nations have already declared Sunday’s vote, which Maduro invited only sympathetic international observers to monitor, a sham.

“The results announced by the illegitimate Maduro regime will not reflect the will of the Venezuelan people,” US Secretary of State Mike Pompeo wrote on Twitter on Sunday.

End of a cycle

Turnout was low with short queues at polling stations. Political analyst Dimitris Pantoulas told Al Jazeera few people were interested in the election and that turnout was likely to come in at only around 30 percent.

Many Venezuelans are struggling with basic needs such as electricity, security and food, and express weariness with the country’s politicians, who they say have done nothing to stem the slide in living conditions.

“I don’t feel like wasting my time, giving these people the opportunity, so I simply don’t vote,” Karol Teran, a nurse and single mother on her way to work in Caracas, told the Associated Press news agency on Sunday. “We’re tired of all this. I’m tired of all of this. It’s not easy.”

In 2015, a euphoric opposition celebrated winning Congress by a landslide, only to see their legislative powers swept aside by pro-government courts and the creation in 2017 of an all-powerful body known as the National Constituent Assembly.

Guaido has been recognised by more than 50 countries including the United States as Venezuela’s legitimate interim president after most Western nations disavowed Maduro’s 2018 re-election as fraudulent.

Those countries are expected to continue their recognition of Guaido, although the opposition is discussing proposals that could limit the size of his interim government and reduce the number of ambassadors.

Despite US President Donald Trump’s campaign of sanctions and diplomatic pressure, Maduro has remained in power, backed by the military and supported by Russia, Cuba, China and Iran. 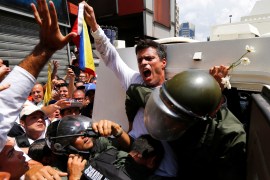 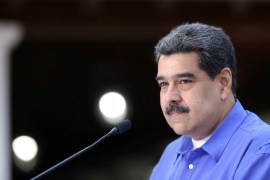 Two foreigners were detained prior to the alleged attack on the Amuay Refinery on Venezuela’s northern Caribbean coast.