The first mobile homes have arrived in central Croatia to shelter people whose houses were destroyed in a deadly earthquake, as tremors continued to shake the area.

A 6.4-magnitude earthquake rocked the region of Petrinja, one of Croatia’s poorest, on Tuesday killing seven people and shaking buildings already weakened by a moderate tremor a day earlier.

Since Tuesday, the Petrinja area has been hit by a series of tremors, including one magnitude 3.7 quake on Thursday morning, according to the United States Geological Survey (USGS).

On Thursday, trucks transported some 20 mobile homes, donated by local hotels and firms, to the affected region.

More than 60 additional mobile homes for some 500 people should get there in the coming days, officials said.

“It is still hard to say how many buildings were damaged, but we know that more than 3,500 were destroyed,” head of the quake-hit county Ivan Zinic told reporters.

More than 50 buildings were razed to the ground and some 200 families need shelter, he said.

Many residents of Petrinja, the town of some 20,000 people, nearby Sisak and surrounding villages spent the second consecutive night in their cars or on the streets fearing stronger earthquakes.

The victims of the earthquake included a young girl struck by falling debris on a street in Petrinja, some 50km (30 miles) south of the capital Zagreb where it tore off bricks and left cracks in some building facades.

“It is the worst time of the year to be homeless” due to cold, Silvana Velic from the village of Majske Poljane, where five people were killed, told AFP news agency earlier.

After spending the night in a car, her four children and husband slept the second night in a donated camping trailer.

More than 800 firefighters are conducting repairs around damaged sites and securing the area, the Croatian Fire Brigade said on Thursday.

Boris Milosevic, a deputy premier in the Croatian government from the minority Serbs’ SDSS party, said on Thursday the first task is to provide shipping containers, tents and temporary accommodation for affected citizens, and then a rapid reconstruction must begin.

“We will take care of everything. Everyone wants to do their best to help the citizens and make it easier for them,” Milosevic said.

He added that 10 shipping containers and a truck of construction materials are scheduled to arrive on Thursday from Bosnia and Herzegovina’s Republika Srpska entity.

The national power firm HEP said some 850 households were still without electricity on Wednesday evening.

Late on Wednesday, a Greek military plane brought humanitarian aid including dozens of tents and electric heaters as well as hundreds of beds and sleeping bags, the interior ministry said. 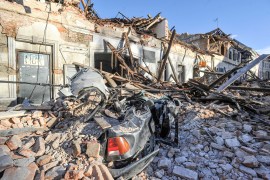 Buildings collapse as earthquake felt throughout the country and as far away as the Austrian capital, Vienna. 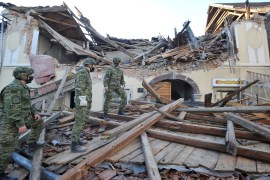 The tremor, one of the strongest to rock Croatia in years, collapsed rooftops in Petrinja, home to 20,000 people. 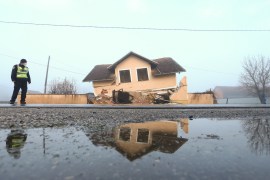 Day after an earthquake killed at least seven and injured dozens, aftershocks rattle a country starting to rebuild.