United States President Donald Trump, continuing to falsely insist the presidential election was “rigged” against him, would not express confidence in his attorney general Thursday, suggesting he has not done enough to uncover election fraud.

“He hasn’t done anything yet,” Trump said about US Attorney General William Barr, who told the Associated Press News Agency on Tuesday that the Justice Department and the FBI to date “have not seen fraud on a scale that could have affected a different outcome in the election”.

Speaking in the White House Oval Office after honouring longtime football coach and supporter Lou Holtz with the Presidential Medal of Freedom, Trump accused Barr and his department of not properly investigating allegations of voting fraud and irregularities.

Since the November 3 election, Trump and his supporters have falsely alleged that widespread voter fraud took place, filing a slew of lawsuits that have largely been unsuccessful and failing to provide any evidence to back up their claims.

The president is reportedly livid at Barr, the Washington Post reported Thursday, with one senior administration official telling the newspaper there was a chance Trump would fire him.

When asked if he still has confidence in Barr as attorney general, Trump demurred.

“Ask me that in a number of weeks from now. They should be looking at all of this fraud. This is not civil. This is criminal stuff. This is very bad criminal stuff,” Trump said.

“When he looks he’ll see the kind of evidence that right now you are seeing in the Georgia Senate,” Trump added.

“They are going through hearings right now in the Senate and they are finding tremendous volumes. So, they haven’t looked very hard. Which is a disappointment to be honest.”

Elections officials in most US states have certified their votes and have declared the voting process free of widespread fraud.

That has not stopped Trump from continuing to make his false assertions, however.

On Thursday, he repeated a debunked theory about “miraculously disappearing” votes and again insisted, without evidence, that “it was a fixed election”.

The president’s comments come a day after he released a 46-minute speech on Facebook in which he said the election results should be “overturned immediately” and recycled more of the same unsubstantiated charges he and his supporters have been making.

The remarks raise questions about how far Trump may be willing to go in his campaign to overturn President-elect Joe Biden’s victory, including whether he might press Republicans in Congress to block certification of the vote, a move that has been floated by the president’s allies.

In fact, Alabama US Representative Mo Brooks said Wednesday that he plans on objecting to the Electoral College votes when Congress meets to make the election official on January 6.

“I’m doing this because in my judgment this is the worst election theft in the history of the United States. And if there was a way to determine the Electoral College outcome using only lawful votes cast by eligible American citizens, then Donald Trump won the Electoral College,” Brooks told The Hill newspaper, prompting a “thank you” tweet from the president Thursday morning.

Thank you to Representative Mo Brooks!

Experts believe a challenge to the electors at that point would only delay the certification process briefly and is not a threat to the result of the election.

The Democrat also won 306 electoral votes compared to 232 for Trump – an Electoral College split that matches Trump’s victory over Hillary Clinton four years ago, which he described then as a “landslide”.

Julian Zelizer, a professor of political history at Princeton University, said the nation has seen close elections before, but this year’s contest does not fit in that category.

“This is just a random baseless attack on the entire election,” Zelizer told the Associated Press. “Trump has no turning point. I often say there are parallels or precedents, but there aren’t in this case. He keeps bending norms.” 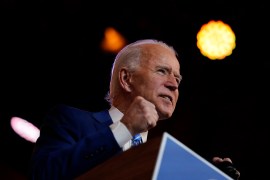 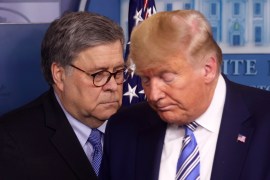 US Attorney General William Barr’s declaration that Biden’s election is sound is yet another blow to Trump. 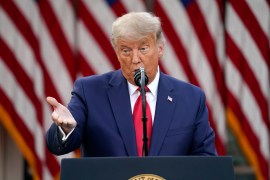