A monolith has been spotted in Southern California that appears to be similar to one discovered in the Utah desert and another that was found in Romania.

It is unclear who placed the monolith on a hiking trail in Atascadero, about halfway between San Francisco and Los Angeles, KEYT-TV reported on Wednesday. The tall, silver structure drew hikers to the area after photos were posted on social media.

The appearance of the California monolith came after several athletes posted on Instagram and YouTube that they were part of a group in Utah that pushed down the hollow stainless-steel structure and took it away in a wheelbarrow. A similar structure that appeared last week in Romania has also disappeared.

The gleaming monolith found deep in the Utah desert was striking, a mysterious beacon that immediately captured the attention of a world grappling with a punishing pandemic casting a pall over the holiday season.

Revealed publicly shortly before Thanksgiving, it drew hundreds of people to the remote, red-rock country to see and touch the otherworldly edifice that evoked both science-fiction films and the state’s famous land-art works.

But the newcomers also flattened plants with their cars and left behind human waste in the bathroom-free backcountry.

Two men known for extreme sports in Utah’s sweeping outdoor landscapes say it was that kind of damage that made them step in late at night and tear it down.

Sylvan Christensen and Andy Lewis have large online followings for their posts about skydiving-like BASE jumping and slacklining, which is like walking an outdoor tightrope. 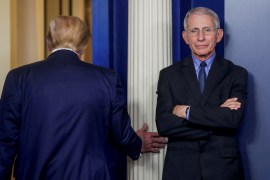 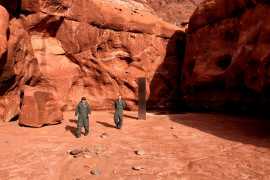 The shiny, triangular metal pillar was spotted from the air last week by baffled local officials in the state of Utah. 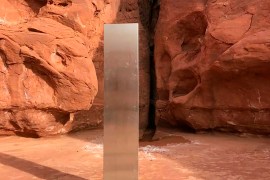 Officials in western US state of Utah cite ‘credible reports’ that the object was removed ‘by an unknown party’.