A strong earthquake in central Croatia has killed at least seven people, injured more than 20 and caused a significant destruction in Petrinja, a town southeast of the capital Zagreb.

Tuesday’s earthquake, which cut phone lines and sent Croatians into a state of shock, was felt throughout the country, neighbouring Serbia, Bosnia and Herzegovina and as far away as the Austrian capital, Vienna. It was the second quake in the area in as many days.

“We have a lot of victims. In the vicinity of Glina, in the town of Majske Poljane, five deaths have been confirmed so far. With a girl from Petrinja, a total of six people died in this devastating earthquake,” Medved told reporters in Glina.

Later, Ivica Perovic, the chief of Lekenik Municipality, confirmed that a body of a man was found in the wreckage of a local church in the village of Zazine, north of Petrinja, increasing the death toll to seven.

“The centre of Petrinja as it used to be no longer exists,” Croatia’s state HRT television reported, saying people remained inside collapsed buildings.

“More victims are feared,” he said. “Army, firefighters, ambulance – everyone is here. I’ve seen firefighters and ambulance cars arrive, emergency workers checked a child for a pulse and transferred them to hospital.

“They are trying to organise themselves. People are shouting, saying that the nursing home should be attended to first.”

Police said at least 20 people were slightly injured and six more severely wounded. Most of the injuries were broken bones and concussions.

“The search through the rubble is continuing,” police said in a statement.

The Croatian Mountain Rescue Service is also involved in search and rescue operations and said it had recovered six people in Petrinja, which is home to about 20,000 people.

“During the night, teams of CMRS members will inspect the terrain and visit the villages between Petrinja and Sisak to see what the situation is like,” the deputy head of the Croatian Mountain Rescue Service, Neven Putar told Hina news agency.

Petrinja Mayor Darinko Dumbovic said in a statement broadcast by HRT TV: “My town has been completely destroyed, we have dead children.

“This is like Hiroshima – half of the city no longer exists.”

Croatian Prime Minister Andrej Plenkovic and other government ministers arrived in Petrinja and Glina after the earthquake.

He said the army has 500 places ready in barracks to house people, while others will be accommodated in nearby hotels and other places.

“No one must stay out in the cold tonight,” the prime minister said.

Al Jazeera reporters in the town witnessed a boy and his father being pulled from a car buried in the rubble. 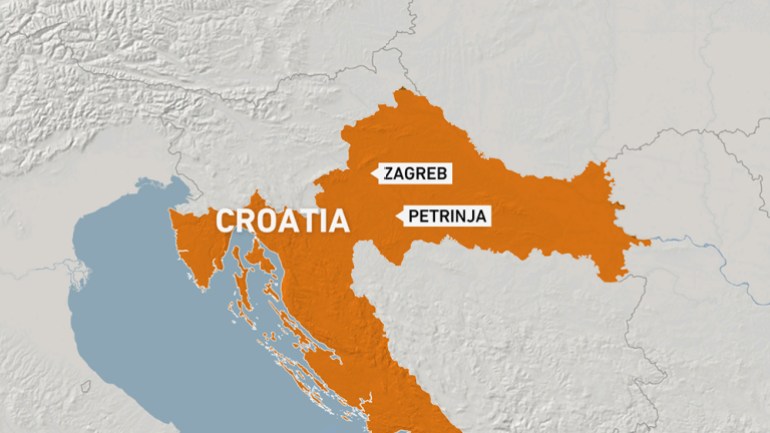 Blanka, a resident of Sisak city, about 14km (8.5 miles) from Petrinja, was inside a shop when the earthquake struck.

“Everything collapsed, all of our things are inside,” she told Al Jazeera. “I don’t know what to expect. I am still shaking, I can still feel the earthquake.”

Tomislav Fabijanic, head of emergency medical services in Sisak, said there were many injured in Petrinja and in Sisak.

“There are fractures, there are concussions and some had to be operated on,” he said.

Croatian Red Cross said it was responding to a “very serious” situation in Petrinja following the earthquake.

The same area was struck by a 5.2 quake on Monday. In March, an earthquake of magnitude 5.3 hit Zagreb causing one death and injuring 27 people.

Croatian seismologist Kresimir Kuk described the earthquake as “extremely strong”, far stronger than the one in spring.

He warned people to keep out of potentially shaky, old buildings and move to the newer areas of the city because of the aftershocks.

In Zagreb, people ran out into the streets and parks in fear. Many reportedly were leaving the city, ignoring a travel ban imposed because of the coronavirus outbreak.

Stephen Hicks, a seismologist at Imperial College in London, tweeted: “We can probably expect quite strong shaking and hence some damage to buildings from this earthquake.”

Our colleagues from Croatian Red Cross are on the ground assisting at the epicentre of the #earthquake at #Petrinja #croatia @crvenikriz_hr pic.twitter.com/tEJ58O8eab

Slovenia’s Krsko nuclear power plant was shut down as a precaution, the plant’s spokeswoman said Tuesday.