Buenos Aires, Argentina – Argentina is marching towards what could be a historic moment as the Senate considers a bill to legalise abortion that, if approved, would make the Latin American country a leader on reproductive rights in the region.

“I have a quota of optimism, because I think we, Argentine women, deserve it,” said Marta Alanis, a member of the campaign to legalise abortion in Argentina and among a group of women who has been waging the pro-choice battle for decades.

“The feminist movement has worked with all political parties for all the laws that have to do with women’s rights,” Alanis told Al Jazeera. “We deserve to have a law that accompanies women at the hour of deciding to terminate a pregnancy.”

The issue remains a divisive one in the predominantly Catholic country, with the Argentine Episcopal Conference issuing a call this week for Catholics and Evangelicals to unite in prayer and to fast against the legalisation, “imploring for respect and care for the unborn life”.

The bill to legalise abortion up until the 14th week of pregnancy passed its first hurdle earlier this month in the lower House of Deputies. It was put forward by President Alberto Fernandez, who adopted much of the language and ideas championed by the feminist movement for 15 years.

Fernandez promised in his 2019 election campaign to legalise abortion, and unveiled his bill to do so in March. The pandemic delayed the initiative until now. It is the first time a president in Argentina has endorsed the legalisation of abortion. But the outcome in the more conservative Senate, which began debating the legislation on Tuesday, is too close to call.

In 2018, the Senate rejected a similar bill following a dramatic debate that altered public discourse on a topic long considered taboo. Now the green scarf that symbolises the legalisation movement in Argentina is held up as a banner of women’s rights across the continent.

Thousands of pro-choice women are planning to camp out in front of the National Congress in anticipation of the Senate results. A smaller group of opponents is expected to show its discontent on Tuesday. The groups will be separated by fencing.

If Argentina legalises abortion, it would be the largest country in the region to do so – only Uruguay, Cuba, Guyana, along with Mexico City and the state of Oaxaca, have legalised elective abortion.

Abortion is illegal in Argentina except in instances of rape or if the mother’s life or health is at risk – but even that law is not universally applied, and there are conservative parts of the country where women are denied the service by doctors who express a moral or religious objection to it, or who avoid providing it out of fear of prosecution.

Both doctors and women who abort face up to 15 years in jail under a criminal code written in 1921.

The illegality has not stopped abortions: Argentine officials estimate that between 370,000 and 522,000 pregnancies are terminated every year, the vast majority in secret. Those with money pay for safer abortions, those without face dangerous consequences. Some 38,000 women end up in hospitals with complications due to clandestine abortions, officials say, and since 1983, at least 3,000 women have died as a result.

Pamela Sires, 32, saw the risky, clandestine world up close. She first considered having an abortion at 16, but decided against it when she saw the harrowing experience of her mother’s friend, who had purchased pills from a woman in their low income neighbourhood on the outskirts of Buenos Aires, and required emergency help. She saw her sister have a similar experience.

So, when Sires became pregnant a few years later, she turned to a clandestine clinic that performed the surgical procedure. It took her weeks to raise the money to pay for it – which was 5,000 pesos (about $60) and represented a large sum for her at the time.

“It was horrible because the desperation, the anguish, the fear you have going to a place like that,” she said. “Because you don’t know if you’re going to come out of there alive,”

Alanis said there are many hospitals in which, when a woman arrives with a hemorrhage, the first thing they ask her is: “What did you do?”

“They are constantly penalising her. We need a law that is clear. A law that lets doctors know what their obligations are, and let’s women know what their rights are and until when,” said Alanis, a founder of the Argentine chapter of Catholics for the Right to Decide.

The Catholic Church and its head Pope Francis, who is from Argentina, are among the key voices in opposition. Lawmakers against legalisation centre their arguments around the concept of defending “both lives” and say there are limits to what a woman should have the right to decide.

“I am in favour of life in absolute terms,” said Natalia Villa, a legislator, during the debate in the House of Deputies. She called the abortion debate “opportunistic” and a “smoke screen to cover a country that is falling to pieces” in the midst of a pandemic.

“The society already debated this two years ago and it was rejected,” said Ana Belen Marmora, a lawyer and spokesperson for the anti-abortion group Frente Joven, or Young Front. She accused the government of turning a blind eye and covering up the country’s immense public health needs that have only become greater this year.

“Wanting to approve something just because it happens is arbitrary and reflects a state that is not taking responsibility for the causes,” she said.

She pointed to a public opinion poll by firm Giacobbe & Associates that found that 60 percent of Argentines are against legalising abortion.

Another poll, by consultancy Poliarquia, found 48 percent opposition, while the Centro Estrategico Latinoamericano de Geopolitica found that 54 percent of Argentines favour legalising abortion in all circumstances.

Giselle Carino, executive director of the New York-based International Planned Parenthood Federation/Western Hemisphere Region, said the impact of legalisation in Argentina would be enormous for the region, at a time when conditions are ripe for change elsewhere.

A court case is seeking to make abortion legal in Brazil, Colombia’s Constitutional Court is considering a case seeking to strip abortion from the country’s criminal code, and Chile is in the midst of rewriting its constitution.

The Argentine debate has included many of the same concepts that are core to the debate in other countries around public health, how illegality leads to death and that it particularly affects vulnerable women.

“What I see that is different in the movement here is this notion of citizenry,” said Carino, an Argentine. “The idea that women are not full citizens without access to legal and safe abortion. And without full citizenry, democracy is not possible.” 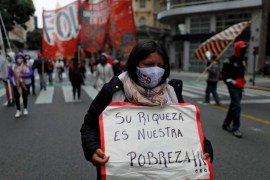 The one-time levy will apply to about 12,000 of the country’s richest and fund medical supplies and aid for businesses. 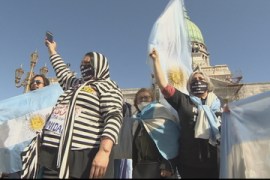 The debate over judicial reform has polarised society once again. 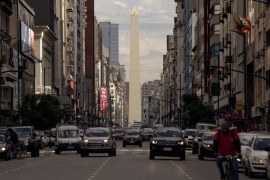 Creditors will decide on Friday whether to accept the country’s $65bn restructuring proposal.