A Saudi terrorism court has sentenced prominent women’s rights activist Loujain al-Hathloul to five years and eight months in prison, local media reported, despite international criticism of her detention and pressure to release her.

State-linked Saudi news outlet Sabq reported on Monday that al-Hathloul had been found guilty by the court on charges including agitating for change, pursuing a foreign agenda and using the internet to harm public order.

The court suspended two years and 10 months of her sentence.

She has 30 days to appeal the verdict.

“Conviction and 5 yrs 8 month sentence handed down to prominent women’s rights campaigner #LoujainAl-Hathloul, already arbitrarily detained for 2 ½ years, is also deeply troubling. We understand early release is possible, & strongly encourage it as matter of urgency,” it said on Twitter.

“She was charged, tried and convicted using counter-terrorism laws,” her sister, Lina al-Hathloul, said in a statement.

“My sister is not a terrorist, she is an activist. To be sentenced for her activism for the very reforms that MBS and the Saudi kingdom so proudly tout is the ultimate hypocrisy,” she said, referring to the Saudi crown prince by his initials.

Al-Hathloul, 31, has been in custody since 2018 after being arrested along with at least a dozen other women’s rights activists.

Al-Hathloul’s case, and her imprisonment for the past two and a half years, have drawn criticism from rights groups, members of the US Congress and European Union lawmakers.

Cale Brown, the deputy spokesman of the State Department said the United States was “concerned by reports” of her sentence.

“We’ve emphasized the importance of free expression and peaceful activism in Saudi Arabia as it advances women’s rights,” Brown wrote on Twitter.

“We look forward to her anticipated early release in 2021.”

Jake Sullivan, who will take over as national security adviser when Joe Biden is sworn in as president on January 20, called the sentence “unjust and troubling” adding that the new administration would “stand up against human rights violations wherever they occur.”

Saudi Arabia’s sentencing of Loujain al-Hathloul for simply exercising her universal rights is unjust and troubling. As we have said, the Biden-Harris administration will stand up against human rights violations wherever they occur.

According to rights group ALQST, court documents in al-Hahtloul’s trial were rife with “gross judicial flaws”, including evidence from the prosecution where she is said to have confessed to actions related to her human-rights activism.

“The more information that comes to light from Loujain al-Hathloul’s trial, the more apparent it becomes how deeply flawed the whole process is,” said ALQST’s Executive Director Alaa Al-Siddiq.

“From the charge sheet and entire evidence relating simply to her peaceful activism, to the deplorable use of the terrorism court and Counter-Terrorism Law, the Saudi authorities are making a mockery of justice, and the international community must call this out.”

Rights organisations have documented the torture and sexual violence al-Hathloul has been subjected to since her arrest.

According to her family members, some of the torture sessions have been in the presence of Crown Prince Mohammed bin Salman’s close aide Saud al-Qahtani.

According to the Sabq outlet, the judge said the verdict was issued in the presence of the prosecutor, the defendant, a representative from the government’s Human Rights Commission and a handful of select local media representatives.

Al-Hathloul was previously jailed in 2014, after Saudi authorities put her in juvenile detention when she tried to drive into the kingdom from the neighbouring United Arab Emirates.

She was freed 73 days later following an international campaign.

‘Not a shrinking violet’

Al-Hathloul was among a handful of Saudi women who openly called for the right to drive before it was allowed in 2018 and for the removal of male guardianship laws that have long stifled Saudi women’s freedom of movement and ability to travel.

Sima Godfrey, an associate professor of French at the University of British Columbia, described al-Hathloul – who attended the university between 2009 and 2014 and graduated with a degree in French – as a “very tough person”.

“She knew what she was risking there and was not afraid. If anything, she was sort of looking forward to the challenge. She’s not a shrinking violet by any means,” Godfrey told CBC television in 2018.

Godfrey said Hathloul comes from a progressive family who encouraged her to get involved in politics, something most Saudi families shun in the kingdom, an absolute monarchy that does not tolerate political dissent.

“She spoke a lot about her mother, who wanted her daughters to be out there and have their voices be heard,” Godfrey said.

A Saudi activist, who declined to be named over fears for her family’s safety, told AFP that al-Hathloul represented the kingdom’s modern feminists.

“Loujain is the young rebel woman from al-Qassim who embodies global values… and calls out the (lies) of the state,” she said.

Al-Hathloul was married for years to Saudi stand-up comedian Fahad al-Butairi, a YouTube sensation popularly known as the “Seinfeld of Saudi Arabia”.

Butairi was arrested in Jordan in 2018 and deported to the kingdom, multiple campaigners and friends of the couple told AFP.

They said he was pressured by Saudi authorities to divorce al-Hathloul after her arrest. Butairi, who has been released from detention and resides in the kingdom, could not be contacted for comment.

Western nations, including the European Union, the United States and Britain, have sought to pressure the kingdom to release the jailed activists.

Some of them have since been provisionally released and are still facing trial.

In 2019, Saudi authorities offered to release al-Hathloul in exchange for her video testimony denying that she had been tortured and sexually harassed in prison, her family claimed.

She refused to accept the “deal”, they said.

Al-Hathloul began a hunger strike in prison on October 26 to demand regular contact with her family, but felt compelled to end it two weeks later, her siblings said.

“She was being woken up by the guards every two hours, day and night, as a brutal tactic to break her,” Amnesty International said last month, citing the activist’s family.

“Yet, she is far from broken.”

Al-Hathloul, arrested in 2018, has been on hunger strike for a week over conditions of her prolonged detention. 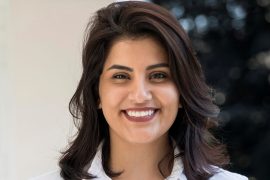 Women’s rights defender was arrested in May 2018 weeks before the lifting of a decades-long ban on female drivers.