Niger began counting the votes on Sunday from an election that is expected to lead to the West African nation’s first transfer of power between two democratically elected presidents.

Results are expected in the coming days.

A smooth handover would be a rare bright spot for a country blighted by poverty and violence that has killed hundred of civilians and soldiers in the last year alone.

Former Minister of the Interior Mohamed Bazoum, the ruling party’s candidate, is the overwhelming favourite to succeed President Mahamadou Issoufou, who is stepping down after two five-year terms leading the largely desert country of 23 million.

Bazoum, 60, has promised continuity with Issoufou’s policies, while also vowing to clean up pervasive corruption.

He faces 29 other candidates, who will hope to force a second round by denying him an outright majority of the vote.

Hama Amadou, who finished runner-up in the last election, was barred from running because of a criminal conviction, leaving the opposition without an obvious figurehead until last week, when his party called on its supporters to turn out for Mahamane Ousmane, who was president from 1993 to 1996.

Al Jazeera’s Ahmed Idris, reporting from Niamey, said President Issoufou was seen entering a polling centre in the city to cast his ballot on Sunday.

Approximately 7.4 million people are registered to vote for the new president, a race that coincides with legislative elections.

Campaigning has been overshadowed by the issue of security in a country that has suffered repeated attacks near its borders with Mali and Burkina Faso from fighters linked to al-Qaeda and ISIL (ISIS). Near its southeastern border with Nigeria, it faces attacks from Boko Haram.

The economic situation is also critical. More than 40 percent of the population lives in extreme poverty, and the COVID-19 pandemic has slowed growth to a crawl, compounding the effects of climate change and low prices for its top export, uranium.

A peaceful transfer of power would be a milestone for Niger, which has experienced four coups since gaining independence from France in 1960.

The army has been deployed for Sunday’s vote, authorities say.

“Sporadic attacks will not prevent the stage of the elections,” a spokesman said on Thursday. 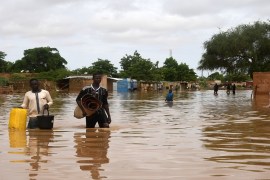 Dozens of mud homes collapsed along the river in Kirkissoye district and rice fields are submerged. 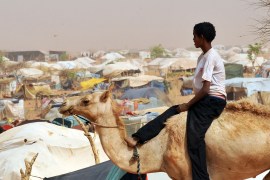 Conference, hosted by the UN, Germany, Denmark and the EU, aims to ‘instil acute sense of urgency’ among policymakers. 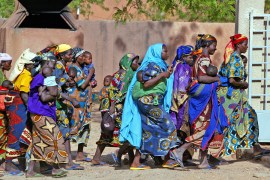 Violence and insecurity have pushed some 7.4 million people in Burkina Faso, Mali and Niger into acute hunger, WFP says.