Authorities in Venezuela have said a boat carrying dozens of migrants towards Trinidad and Tobago sank earlier this month because there were too many people on board.

In a statement on Friday, the country’s interior and justice department said 41 people were in the boat that was equipped to carry only eight people.

“The main cause of the sinking was the overloading of the boat,” it said.

The department also said people “did not have life jackets or safety equipment necessary for navigation” and poor weather conditions had created large waves measuring two to three metres.

Venezuelan officials have said 29 people died when the boat sank on December 6 about 20km (12 miles) from the coastal town of Guiria in the country’s northeastern state of Sucre.

The victims’ loved-ones told AFP news agency that 34 bodies have been found.

William Spindler, a spokesman for the UN refugee agency (UNHCR) in Latin America, told Al Jazeera in an email on December 18 that local non-profit groups and Venezuelan authorities had indicated that children and a pregnant woman were among the bodies found.

“We are appalled at this tragedy which shows the dangers that desperate refugees and migrants take in search of protection or a better life,” Spindler said.

About 5.4 million Venezuelan refugees and asylum seekers have sought refuge outside the country, which faces dire economic and political crises, according to the UNHCR and the International Organization for Migration (IOM).

The UNHCR says there has been an 8,000 percent increase in the number of Venezuelans seeking refugee status since 2014. Most have gone to other countries in Latin America.

The groups said in a statement this month that 16,000 Venezuelans were registered by the Trinidad and Tobago government in May 2019.

“This is the second recorded shipwreck off Venezuela this year. In 2019, three boats were reported missing between Venezuela and the Caribbean islands of Trinidad and Curacao, with the loss of at least 80 lives,” the organisations said.

Residents of Guiria held funeral processions earlier this month after some of the bodies were recovered.

The AFP reported on December 17 that about 100 people had followed a truck carrying the coffin of Cristalinda Goitia, a 36-year-old teacher who was on board the boat with her 11-year-old son, Cristian Garcia Goitia.

Goitia, who had been hoping to spend Christmas with her husband and possibly stay in Trinidad, was buried alongside her son, who was laid to rest there a few days earlier.

“Wait for me in heaven my daughter,” her mother said.

Human rights groups estimate that about 40,000 migrants have travelled from northeast Venezuela to Trinidad and Tobago after crossing the 20km maritime route known as Dragon’s Mouths.

Venezuelan authorities have said “mafias” traffic migrants in that area. 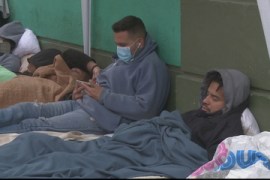 European countries are appealing for money to help more than five million Venezuelan migrants who left their homes because of the economic crisis. 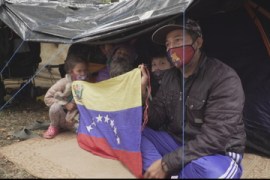 With the spread of the coronavirus worsening across Latin America, thousands of Venezuelan migrants in Colombia, Ecuador and elsewhere are trying to return home. 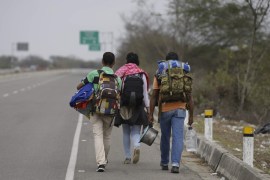