Uganda has suspended all campaigning for January’s presidential polls in the capital and 10 highly-populated districts, citing coronavirus risks, but critics said the real reason was the opposition’s popularity in these areas.

The East African country is scheduled to hold the presidential election on January 14.

“The Independent Electoral Commission has suspended campaign meetings in districts and cities categorised by the Ministry of Health as having high spread of Coronavirus. From December 26, 2020, no campaign meetings will be held in Mbarara, Kabarole, Luwero, Kasese, Masaka, Wakiso, Jinja, Kalungu, Kazo, Kampala City and Tororo,” commission spokesman Paul Bukenya said in a statement on Saturday.

Uganda has reported 33,360 COVID-19 infections and 245 deaths from the virus since the pandemic began.

Pop singer-turned-politician Bobi Wine, 38, whose real name is Robert Kyagulanyi, has emerged as the strongest challenger to President Yoweri Museveni, 76, who has been in power since 1986.

Bobi Wine is popular among young people in the country. Many of his supporters say they are drawn to him by the criticism of Museveni’s government woven into his lyrics. Others say that as a young leader, he is better positioned to tackle the challenges they face.

Last month, three people died in protests that erupted after police arrested Bobi Wine while he was campaigning in the country’s east for violating anti-coronavirus measures.

Bobi Wine said the commission’s action was “cowardly” in a tweet after the announcement, adding: “The dictatorship is in panic. They have been surprised by the massive enthusiasm and support we have received within all parts of the country. They just can’t imagine what would happen if they allowed our people to meet in these areas.”

He had rallies scheduled in Kampala next week.

The ruling National Resistance Movement has no problem with the suspension of campaigning because they believe the commission took the decision to save the lives of Ugandans, party spokesman Rogers Mulindwa told Reuters news agency.

The electoral commission had earlier restricted campaign rallies to no more than 200 people to avoid the spread of the virus. 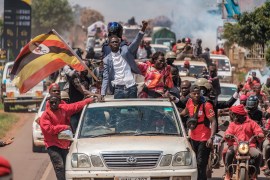 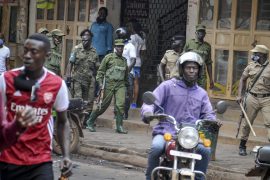 At least 16 people killed in protests over the arrest of presidential candidate and pop star Bobi Wine. 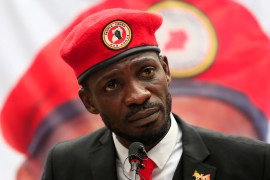