Unidentified “armed combatants” have killed three peacekeepers from Burundi in the Central African Republic (CAR), the United Nations said on Friday, hours after a rebel coalition fighting the government called off a unilateral truce and reiterated calls for the suspension of a general election scheduled to take place on Sunday.

The attacks on UN peacekeepers and CAR troops took place in Dekoa, central Kemo prefecture, and in Bakouma, southern Mbomou prefecture, the UN said in a brief statement.

“Three peacekeepers from Burundi were killed and two others were wounded,” the statement said, without providing further details.

The attacks came as voters in CAR geared up for presidential and legislative elections, deemed a key test for the country’s ability to recover stability after decades of political turmoil and armed conflict.

President Faustin-Archange Touadera, seeking another mandate, is the favourite to win the presidential election in a field of 17 candidates.

The country’s constitutional court ruled on Saturday the presidential elections will proceed as planned on Sunday, after several opposition groups as well as a recently formed coalition of armed groups – the Coalition of Patriots for Change (CPC) – called for a vote delay.

The court has rejected several candidacies for the election, including former President Francois Bozize, who was removed in 2013 following a rebellion led by the Seleka fighters.

Speaking from the capital Bangui, Al Jazeera’s Catherine Soi said the atmosphere is one heavy with tension.

“The court said the petitioners did not have strong enough grounds to have the election postponed,” she said.

“We have spoken to UN officials who say 70 percent of the country is safe enough for people to come out to vote. We have spoken to the government’s spokesman who said that yes, they expect a low voter turnout but they hope that this turnout won’t be so slow as to discredit process.”

The CPC, formed on December 19 and drawing from militia groups that together control two-thirds of the country, launched an offensive last week and threatened to march on the capital, Bangui.

The government called the move a “coup”, accusing Bozize of stoking the CPC rebellion to disrupt the election.

The former president, who is under UN sanctions, denied the claim.

The rebel alliance’s progress was halted with international help: Russia and Rwanda sent troops to shore up Touadera’s government, while UN mission in South Sudan also sent 300 peacekeepers to CAR on Thursday to help the country “secure the elections”.

The CPC announced a brief unilateral truce on Wednesday, but called it off on Friday, saying the government had “cavalierly rejected” this “chance for peace”.

Hours later, the UN’s MINUSCA peacekeeping force said fighting resumed in Bakouma, about 250km (155 miles) east of Bangui. Gunmen had sought to advance down the main highways towards Bangui but were stopped, according to MINUSCA, which has more than 12,500 uniformed troops in the country.

Three days before the elections in the Central African Republic 🇨🇫, @UNPOL #MINUSCA is stepping up its patrols and securing the centers of the voter card collection to reassure the population of #Bangui and the regions. pic.twitter.com/8a66GfvbxJ

Touadera, who has been campaigning in Bangui flanked by Russian, Rwandan and UN guards, has urged voters to come out and vote without fear on Sunday

“They are trying to come to Bangui. You Central Africans must open your eyes,” he told supporters at his final campaign rally. “Help our armed forces, UN peacekeepers MINUSCA, those from Rwanda and Russia. They are giving us a hand. Don’t let those armed fighters come into the city.”

Speaking to Al Jazeera on Saturday, the UN resident coordinator in the country Denise Brown said the situation in Bangui is “calm”.

“Distribution of the voter cards is ongoing and the electorate of this country who are registered to vote are coming in large numbers to collect their cards,” she said.

“The population is determined to vote tomorrow. And we are determined, at the United Nations – with the support of the international community – to ensure that the vote goes ahead.”

Several opposition candidates had stopped their campaign some time ago, demanding an election delay.

Al Jazeera’s Catherine Soi said people “do not have an appetite for any kind of conflict … and want to exercise their right to vote”.

“When you go outside Bangui, to the countryside, people are very afraid. We are hearing of fighting in various places, people being displaced,” she added.

The Human Rights Watch (HRW) on Wednesday said at least five civilians have been killed while the UN said more than 55,000 people have fled their homes for fear of attacks.

HRW, in a statement on Wednesday, accused the CPC of creating havoc and said the groups that make up the alliance have committed war crimes over the past five years, “including deliberately killing civilians, raping women and girls, and deliberately destroying civilian property”.

Meanwhile, Paul Melly, a fellow at the Africa Programme at Chatham House, said the CAR government was not likely to agree to CPC’s demands and delay the vote.

“The United Nations, MINUSCA and the government have put a huge effort into organising in mobilising the electoral process,” he told Al Jazeera from London, the capital of the United Kingdom.

“They got everybody registered, they have been distributing or starting to distribute voter cards … a lot of people in Bangui want to go ahead and exercise their right to vote.” 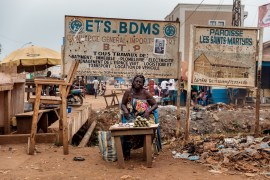 ‘Lingering crisis’: What people in CAR think about Sunday’s polls

Opposition requests to delay elections denied by the court amid escalating threat of violence. 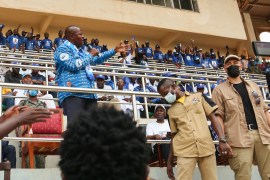 Rebel coalition says it is calling off three-day ceasefire, already dismissed by government, ahead of general election. 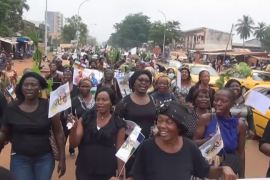 Coalition of Patriots for Change says a 72-hour unilateral truce will be observed across the Central African Republic. 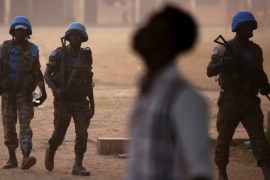 The attacks followed government accusations that ex-president Francois Bozize was plotting a coup.