Correction23 Dec 2020
This story was corrected to reflect the accurate translation of Benny Gantz's comment.

Netanyahu and his former election rival, Defence Minister Benny Gantz, established a unity government in May in the wake of three inconclusive elections held since April 2019, but the coalition had been inching towards collapse for weeks, undermined by mutual acrimony and mistrust.

Under the three-year coalition deal, Netanyahu was supposed to serve as prime minister for 18 months, with Gantz taking over in November 2021.

Gantz had demanded the government pass a budget covering 2020 and 2021, arguing Israel, and the coalition, needed stability.

But Netanyahu refused to endorse the spending plans for 2021.

“The reason we’re heading to an election is because Netanyahu refused to pass a budget as required by law and honour political agreements so that he can remain in power for the duration of his trial,” Yohanan Plesner, the head of the Israel Democracy Institute (IDI) think-tank, told the AFP news agency.

The coalition had until midnight to pass the 2020 budget. Failure to do so prompted parliament’s dissolution with polls expected to take place on March 23.

“If an election is forced upon us, I promise you that we will win,” Netanyahu said in a televised speech ahead of the dissolution, blaming Gantz – whose support in opinion polls has plunged – for the early ballot.

Gantz has said he never trusted Netanyahu, but wanted to spare Israelis a fourth election, especially as the pandemic was gathering pace.

“Netanyahu is taking us to an election for the sole purpose of not entering the courtroom,” Gantz wrote on Twitter, alleging that Netanyahu hoped for a new government to promote legislation quashing legal proceedings against him.

Netanyahu will remain prime minister until a new government is formed after the election. Now 71, he first served in the post from 1996 to 1999 and has held the office since 2009.

In his TV address and effectively kicking off his campaign, Netanyahu said he had arranged for millions of doses of coronavirus vaccine to be delivered to Israel. He also hailed US-brokered diplomatic deals with the United Arab Emirates, Bahrain, Sudan and Morocco.

Netanyahu enjoyed a close relationship with President Donald Trump, who made a number of pro-Israel moves during the previous elections. But with US President-elect Joe Biden set to take office in January, Netanyahu will lose a big campaign asset, said Reuven Hazan, a political scientist at Jerusalem’s Hebrew University.

Netanyahu could also be forced to campaign in February, when he is due to appear in court multiple times a week to face charges of bribery, fraud and breach of trust.

The veteran politician is accused of accepting improper gifts and seeking to trade favours with media moguls in exchange for positive coverage. He has denied wrongdoing.

“He is certainly very weak – much weaker than he has been politically for a long time – not only because he faces this looming corruption trial but also because Israelis widely believe he’s mishandled the pandemic,” Dov Waxman, a professor and the Rosalinde and Arthur Gilbert Foundation Chair in Israel Studies at UCLA, told Al Jazeera. “They are suffering economically as a result of that and also Donald Trump will no longer be in the White House by that time so some of the factors that allowed him to prevail in the past aren’t there.”

Netanyahu also faces a new challenge from influential right-winger Gideon Saar, who left Likud has set up his own New Hope party. Multiple polls suggest Saar could peel significant support away from Netanyahu.

His Blue and White party fractured when he made the coalition deal with Netanyahu and recent polls suggest it would win only a handful of seats.

“We enter this election with a clear advantage in polls for the political right,” Plesner of the IDI said, while stressing “the growing possibility” that a right-wing camp emerges that refuses to accept Netanyahu as prime minister. 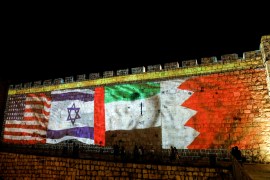 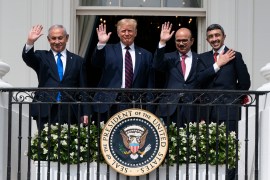 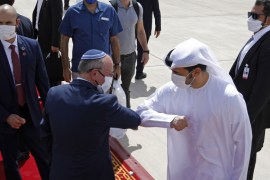 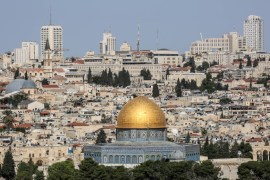