The police officers were responding to a call over domestic violence in the central region of Puy-de-Dome when they were shot by a 48-year-old man.

Police approached the house shortly after midnight and were hit by gunfire as they attempted to rescue a woman, local media reported.

The man initially shot and killed one officer and wounded another. Two other officers were then shot dead, according to the Clermont-Ferrand prosecutor’s office.

The woman, who was the reported victim of domestic violence, sought refuge on the roof of the house and was rescued safely by police.

A fourth officer was also injured in the shooting. The 48-year-old shooter had set fire to his house, according to Darmanin.

Darmanin said a large number of security forces – including elite police officers – were deployed to the area. 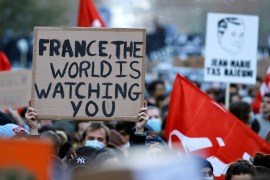 Bachelet says controversial ‘Article 24’, which would make sharing images of police illegal, should be withdrawn. 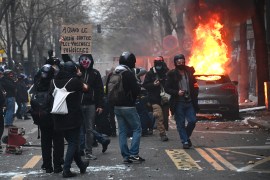 French Interior Minister Gerald Darmanin said 64 people had been detained in protests across the country so far. 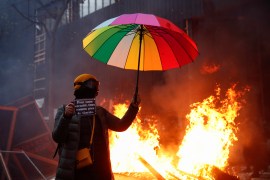 Violence erupts in French capital for a second consecutive weekend during mass protests against a draft security law.