President-elect Joe Biden will be sworn into office exactly four weeks from Wednesday – on January 20 – but in the meantime, departing President Donald Trump still occupies the White House and has been busy plotting behind the scenes.

Trump is reportedly mulling over several ideas to hatch in his final month in office ranging from the controversial to the harebrained.

What Trump has been obsessed with most since his election loss is his continued attempts to subvert the election results, which have failed at every turn to date. Trump has been reportedly asking about or encouraging new last-ditch gambits, each more desperate than his prior efforts. The president has also reportedly been plotting ways to reward his loyal backers who may be in legal hot water as well as to increase pressure on Joe Biden’s son, Hunter, who is facing his own legal woes.

Here are four things Trump could do before the clock strikes noon on January 20:

Getting Congress to reject the Electoral College

Despite the extreme futility of this idea, it is not stopping Trump and some of his Republican backers from pursuing it.

Congress will convene on January 6 to officially count the Electoral College vote, which took place on December 14 and turned out as expected: Joe Biden won 306 electoral votes to Donald Trump’s 232. Constitutionally, that vote made Biden the winner of the 2020 presidential election.

During next month’s joint session of Congress, any member can raise an objection to any state’s electoral vote result. If one member of the House along with one member of the Senate together object to a state’s votes, then the House and Senate would return to their respective chambers and debate the objection for two hours.

Following debate, each body would vote and if a majority of both the House and Senate uphold the objection, the electoral votes would be disqualified, something that has not happened since the enactment of the Electoral Count Act of 1887.

The most recent vote on an objection happened following the 2004 presidential election when Democratic Senator Barbara Boxer and Democratic Representative Stephanie Tubbs-Jones objected to George W Bush’s Ohio victory, arguing there were voting irregularities in that state. The objection was not upheld.

Trump met with several Republican members of the House on Monday, including some who have publicly stated they will object to certain state’s electoral votes. And Trump himself has been tweeting about it, even thanking Representative Mo Brooks, who has spent the past three weeks organising the objection effort.

Thank you to Representative Mo Brooks!

“The date of ultimate significance … is January 6,” Trump’s daughter-in-law Lara Trump told Fox News on Tuesday. “And I think that there are going to be people who say we do not agree with Joe Biden as the 46th president of the United States. We believe that Donald Trump won this election and that is their right.”

So, why is this effort extremely futile?

First, there are no current Republican senators who have said they will join House members who raise objections. Those who have spoken out have said the idea will not go anywhere.

“I mean, in the Senate, it would go down like a shot dog,” John Thune, the number-two Republican in the Senate, told CNN on Monday. “I just don’t think that it makes a lot of sense to put everybody through this when you know what the ultimate outcome is gonna be.”

Senator-elect Tommy Tuberville did suggest last week he would raise an objection – and he will be sworn in three days before January 6 – but Senate Majority Leader Mitch McConnell, after belatedly congratulating Biden on his victory last week, warned Republican senators not to object on January 6 as the subsequent vote would put them in the politically fraught position of having to publicly vote against Trump or to oppose the will of the voters. It is not clear whether McConnell has reached out to Tuberville, whose comments were lauded by Trump.

Tommy will be more popular than ever before – a hero! https://t.co/dTAXJyENlr

However, it remains to be seen whether the new senator will actually buck his leader in the chamber so soon after taking office.

Even if objections made it to votes in the House and Senate, the Democratic House certainly would not uphold them, and enough Senate Republicans have said they would vote to reject that the challenges “would go down like a shot dog”, as Thune said.

Trump has inquired about and pushed for an independent special counsel to investigate widespread election irregularities, proof of which to date have not been discovered by state elections officials or federal investigators.

“If I thought a special counsel at this stage was the right tool and was appropriate, I would name one,” Attorney General William Barr said Monday. “But I haven’t and I’m not going to,” added Barr, who is stepping down from his post on Wednesday, and whose successor, Jeffrey Rosen, will have to deal with Trump’s pressure on the matter when he takes over as acting attorney general.

Meanwhile, Trump reportedly wants to see a special counsel named to investigate Joe Biden’s son Hunter. The Justice Department is already investigating the younger Biden’s tax affairs, which came to light two weeks ago. And even though a special counsel would ensure those investigations continue under Joe Biden’s presidency, Barr said he has “no plan” to appoint one.

The investigation is “being handled responsibly and professionally currently within the department”, Barr said.

Trump already pardoned his former National Security Advisor Michael Flynn, who had pleaded guilty to lying to the FBI about his 2016 conversations with the Russian ambassador to the US.

Where Trump is breaking tradition is his consideration of pre-emptive pardons – pardoning individuals who have not been charged with a federal crime but giving them immunity from future investigations. Trump reportedly has asked about that type of pardon for members of his family, including his daughter Ivanka and her husband, Jared Kushner. Also, Trump’s friend and lawyer Rudy Giuliani has reportedly been lobbying for one as well.

And where Trump could obliterate tradition would be if he follows through on giving himself a pre-emptive pardon, something that has sparked debate among constitutional experts.

Richard Nixon considered this idea after he found himself in hot water over the Watergate scandal, but his legal experts concluded it was not a feasible idea. Eventually, his successor, Gerald Ford, pardoned Nixon after he resigned in 1974.

Even if Trump does pardon himself and it holds up legally, it would only shield him from federal prosecution. There is an investigation into Trump’s business dealings being conducted by a local district attorney in New York, which would not be affected by a self-pardon.

Could Trump get the military involved in his efforts to cling to the presidency? That is an idea that has been suggested publicly by Flynn and was reportedly brought up by Trump in a meeting on Friday that included Flynn.

“He could also order, within the swing states, if he wanted to, he could take military capabilities and he could place them in those states and basically rerun an election in each of those states. It’s not unprecedented,” Flynn said on Newsmax TV last week, incorrectly suggesting that invoking martial law to throw out legal votes is “not unprecedented”.

Flynn’s comments prompted Army Secretary Ryan McCarthy and Chief of Staff General James McConville to release a joint statement on Friday insisting there “is no role for the US military in determining the outcome of an American election”.

And during Trump’s Friday meeting, the idea was reportedly “shot down” by his top advisers. 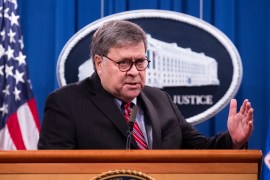 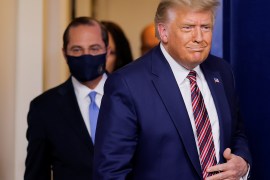 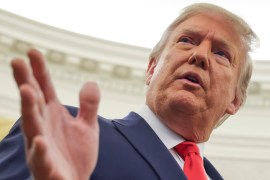 In latest effort to overturn election result, the Trump campaign says it filed a new petition with the US Supreme Court. 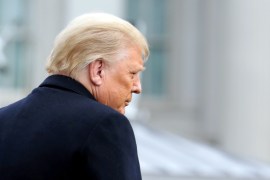 Trump has a Russia ‘blind spot’, says US Senator Romney

President Donald Trump downplayed cyberattack on US gov’t agencies, which US officials have blamed on Russia.