The strike began on Monday after the Kenya Medical Practitioners, Pharmacists and Dentists Union said on Twitter that there had been no resolution of grievances raised over the last eight months.

“The Kenya government has neglected the Welfare, Safety & Health of health care workers,” the union said on Sunday.

“No provision of medical insurance, Workman injury benefits & Compensation & lack of adequate quality PPEs. This greatly hampers the fight against #COVID19 in a country with an acute shortage of doctors.”

At least 14 doctors have died of the coronavirus in Kenya since the first case was confirmed in March, according to the doctors union.

The strike had been due to start on December 7 but was postponed for two weeks to allow more time for talks with the government.

The virus has been spreading to rural areas where the public health system is creaking and limited ICUs are at full capacity, leading to patients being turned away, medics told Reuters news agency this month.

Nearly three-quarters of Kenya’s ICU beds are in the two largest cities, Nairobi and Mombasa.

Kenya reported 349 new cases of COVID-19 and six deaths in the past 24 hours, bringing the number of confirmed cases to 94,500 and the number of deaths to 1,639, the health ministry said.

“It’s about the safety and welfare of the doctors,” Chibanzi Mwachonda, secretary-general of the union, told Reuters news on Monday, adding that the country’s fight against the coronavirus would be badly hampered by the walk-out, but the medics had no other choice.

In August, doctors in most public hospitals in the capital Nairobi went on strike for a week to protest salary delays and lack of PPE.

Doctors working in hospitals run by regional county governments have also been staging strikes off and on since March over similar grievances. 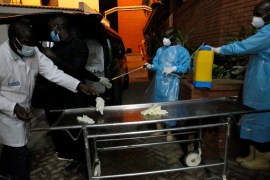 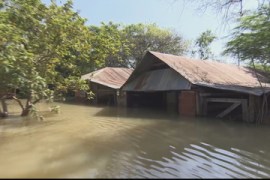 Rising water levels along Kenya’s Great Rift Valley have forced thousands of people from their homes as two lakes are getting closer, raising fear of contamination. 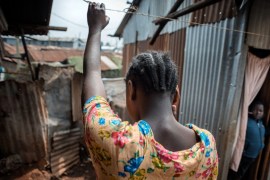 ‘It ruined my life’: School closures in Kenya lead to rise in FGM

With classrooms closed to curb coronavirus, girls are more at risk of FGM, teenage pregnancy and child marriage.