Tehran, Iran – Prominent human rights lawyer Nasrin Sotoudeh will be moved back to prison less than one month after being temporarily released because of health concerns, according to her husband.

Reza Khandan said a medical examiner had recommended a two-week extension of his wife’s furlough, but authorities said she must immediately return.

“They called from the courts and said she has to report back to prison today and we’re just packing up to go now,” he told Al Jazeera.

Sotoudeh – a recipient of the prestigious Sakharov Prize of the European Parliament – was arrested two years ago on charges of collusion, spreading propaganda, and insulting Iran’s supreme leader.

She was sentenced to 38 years in prison and 148 lashes in 2019. She is required by law to serve at least 12 years of her sentence before being eligible for conditional release.

Sotoudeh, 57, was due to undergo another round of scans and tests to monitor her heart on Sunday, Khandan said.

Her temporary release came weeks after she was moved to intensive care in a hospital in Tehran following a lengthy hunger strike.

Her 46-day hunger strike – aimed at directing attention towards the condition of political prisoners and calling for their release amid the COVID-19 pandemic – ended in late September.

Khandan said Sotoudeh contracted the novel coronavirus in her final days in the Qarchak women’s prison just before coming out on furlough.

“Fortunately her [COVID-related] illness wasn’t so serious that she would need to be hospitalised, but we’ve been dealing with it all this time at home and now she has to go back just as she’s getting a bit better,” he said.

Khandan said health concerns continue to be a factor at the prison outside Tehran.

“Qarchak provides no ordinary conditions for prisoners. Even when [Sotoudeh] was not there we would warn of health concerns but nobody would listen,” he said.

On October 20, Sotoudeh was transferred from Evin Prison in the capital to Qarchak, a prison that has been the subject of human rights concerns by international groups.

At the time, they were said to issue “immediate orders” to answer a number of requests by inmates, without releasing details.

The internationally recognised lawyer, whose release has been advocated by the UN and human rights groups outside Iran, has been imprisoned before.

Sotoudeh represented people arrested during mass protests in 2009 against the controversial re-election of former President Mahmoud Ahmadinejad and spent three years behind bars.

She has also represented women who have protested against Iran’s mandatory hijab rule. 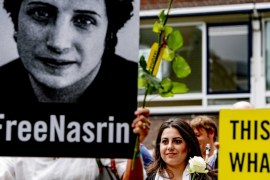 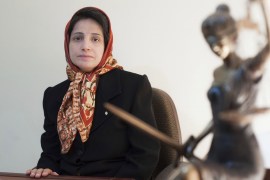 Sotoudeh released on furlough from a women’s prison outside Tehran shortly after ending lengthy hunger strike.