Protesters in Sudan’s capital and across the country demanded a faster pace to democratic reforms in demonstrations that marked the second anniversary of the uprising that led to the military’s removal of former leader Omar al-Bashir.

The protests on Saturday come amid rising tensions between military and civilian members of Sudan’s transitional government, which was set up after al-Bashir’s arrest in April 2019 and has promised sweeping reforms.

Black plumes of smoke billowed into the sky from burning tyres in the capital Khartoum’s southern Al-Sahafa district, with protesters marching to the gates of the presidential palace chanting “justice”.

Demonstrators, many of them young and frustrated by what they see as a lack of change amid a dire economic crisis, waved the national flag or carried photographs of people killed during past protests as they marched.

“Today we have sent a very clear message to the civilian and military government,” said 21-year-old protester Nada Nasereldine.

“We have the power of the streets, it is our weapon and we will use it if our demands are not met.”

Demonstrations also took place in Omdurman and Bahri, cities across the Nile from Khartoum, and in key towns including Madani and Atbara, as well as in the east, in Kassala and Port Sudan on the Red Sea. Thousands of people took part, according to estimates by the AFP news agency correspondents and other journalists.

Protesters at Khartoum’s airport held up printed posters of Prime Minister Abdalla Hamdok, his image scored out with the words: “Go away!”

Some shouted slogans of the revolution, including “the people want the fall of the regime” – also a rallying cry during Arab Spring demonstrations in the region 10 years ago.

“We have taken to the streets today because the transitional government does not meet our demands,” Hani Hassan, a 23-year-old protester, told AFP, criticising the economic crisis in the country.

Al-Bashir was finally removed by the army in April 2019, and the new authorities have since put him on trial over the coup that first brought him to power in 1989.

But those responsible for the repression during the 2018-19 protests have not been brought to justice.

The transitional government faces steep challenges in transforming Sudan’s economic system and meeting the demands of the protest movement, which has been spurred by soaring prices of staple goods and rising youth unemployment.

The government has been struggling with a huge budget deficit and widespread shortages of essential goods, including fuel, bread and medicine.

Annual inflation soared past 200 percent in the past months as prices of bread and other staples surged, according to official figures.

The demonstrations have come amid an increase in the reported coronavirus cases in the county.

Overall, Sudan has reported more than 22,620 confirmed cases, including 1,425 deaths. The actual COVID-19 tally is believed to be higher given the country’s limited testing capabilities.

Abdalla Hamdok takes aim at military over vast economic activities, which he says should be limited to defence sector. 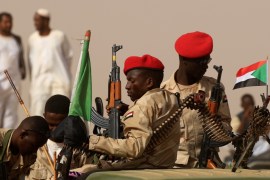 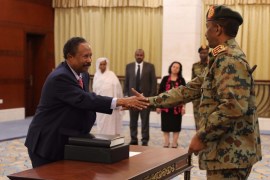 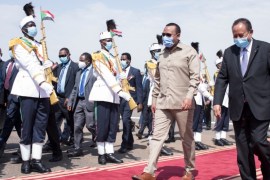