After being gang-raped by soldiers, steely eyed Thein Nu went up against Myanmar’s powerful military in a months-long fight for justice – a fight that paid off with a rare legal victory.

Her three rapists were jailed for 20 years with hard labour, a sentence she hopes will give other survivors the courage to speak up and challenge the military’s impunity.

Lodging a legal complaint pitted the 36-year-old mother of four against Myanmar’s most powerful institution, whose soldiers have long been accused by rights groups of using rape as a weapon of war in the country’s conflict zones.

The crime was committed in June in northern Rakhine state – the site of a nearly two-year battle between the military and the Arakan Army, which is fighting for more autonomy for the ethnic Rakhine population.

“Many women like me have already endured the same thing,” Thein Nu – who has been given a pseudonym to protect her identity – told the AFP news agency.

“If I didn’t reveal this, it could lead to many more in Rakhine [being abused].”

Her victory came after an initial denial from the military, which said she made up the allegations, and she still faces the glare of widespread social stigma, including from her husband who refuses to speak to her.

“I am both happy and sad,” she said, still in disbelief that the military tribunal ruled in her favour.

“I don’t entirely believe this verdict will stop the rape and abuse against women in conflict areas because they (the military) are unreliable people with two faces.”

In a rare acknowledgement of wrongdoing, the military on Saturday announced the verdict and sentence against the three rapists, trumpeting its own “transparent” investigation of the case.

But observers warned it is too soon to judge whether Thein Nu’s victory will be a watershed moment for the armed forces – which ruled Myanmar outright until 2011 and still holds sway over many aspects of life in the country.

Phil Robertson of Human Rights Watch said it was not yet clear whether the army was ready to tackle alleged atrocities committed by its rank and file.

In the past, its approach has been to deny rape claims outright, and in some cases, soldiers file defamation suits against the victim, he said.

“It’s going to require a lot more than just one case to convince us that some kind of turn has been reached,” he told AFP, adding that the military tribunal was held behind closed doors.

As dusk fell, gunfire erupted in her village, and she hid with her daughter and granddaughter in her mother-in-law’s house alongside other women and children.

Close to midnight four soldiers burst into the house and discovered their hiding spot after the baby started crying.

“I realised I had no way to escape from three men who are more powerful than me,” she said.

After the attack, Thein Nu and her children fled the village and headed for Sittwe, where she made the agonising decision to pursue justice.

With the three rapists put away, Thein Nu wants the fourth senior officer – who she believes could have stopped the attack – to face justice, as well.

Since the sentences were handed down, more rape victims have come forward to seek legal help, according to Nyo Aye, chairwoman of the Arakan Women Network, which provided legal aid, counselling and shelter to Thein Nu and her family.

“Currently, we are keeping our hope … for similar cases that happened in other ethnic areas around the country,” Nyo Aye said.

The tribunal also informed the rape victim that proceedings would continue against the fourth soldier, who stood by.

For now, Thein Nu grapples daily with the deep social stigma attached to being a rape victim in Myanmar.

Her husband, who is working in Thailand, has abandoned her and stopped sending the family financial support.

“As I silently suffer from the pain, I can only hope he will gradually understand me,” she told AFP.

But she took solace in the hope that her success in court could encourage others to come forward instead of hiding in shame.

“I would like to urge all the girls in Rakhine who suffered from this to speak the truth instead of being ashamed and hiding it,” she said. 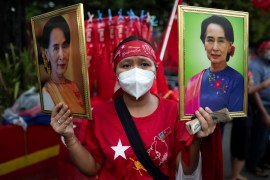 Another landslide victory for Aung San Suu Kyi’s party means it has a chance to push through reforms – if it wants. 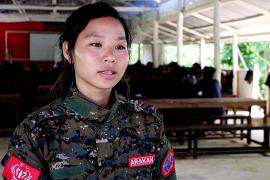