The United States plans to unseal charges soon against a Libyan man suspected of assembling the bomb that blew up a US airliner over Lockerbie, Scotland, in 1988, US newspapers reported on Wednesday.

The suspect, Abu Agila Mohammad Masud, is currently being held by the Libyan authorities, according to The Wall Street Journal newspaper and US authorities are seeking his extradition to stand trial in the US.

The Journal said Masud, alleged by US prosecutors to have been a top bomb-maker for the late Libyan leader Muammar Gaddafi, is suspected of assembling the device that blew up Pan Am Flight 103.

The New York Times newspaper said Masud’s exact whereabouts are unknown but he had been imprisoned in Libya at one point for unrelated crimes.

In 2003, Gaddafi accepted his country’s responsibility for the bombing and paid compensation to the victims’ families, but did not admit personally ordering the attack.

32nd anniversary of the bombing

Monday is the 32nd anniversary of the bombing which killed a total of 270 people, including 190 Americans and 11 people on the ground.

To this day, the bombing on December 21, 1988, remains the deadliest attack ever by a hardline group perpetrated on British soil.

The Journal said the case against Masud is based largely on a confession he gave Libyan authorities in 2012 as well as travel and immigration records.

In a statement, the FBI said that while it “cannot comment on any upcoming announcement, we can assure the public and most importantly, the families of the Pan Am 103 victims, that we have worked tenaciously for 32 years to investigate this horrific terrorist attack”.

“Domestic and foreign partners alike have been focused on identifying who was responsible for the bombing,” the FBI said in a statement.

“Just as in any investigation, the FBI is persistent in our investigations with a dedicated focus on the victims of crime and terrorism.”

Two Libyans were put on trial in the Netherlands for their alleged roles in the attack and one of them, Abdelbaset al-Megrahi, was convicted in 2001.

Al-Megrahi, a former Libyan intelligence officer, was sentenced to life in prison but was released in 2009 and died in 2012.

A court in Scotland last month heard a posthumous appeal against his conviction brought by his family and the judges who heard the case are mulling their ruling.

Outgoing US Attorney General, William Barr, was the acting attorney general when the first charges were brought against al-Megrahi and Fhimah in 1991. 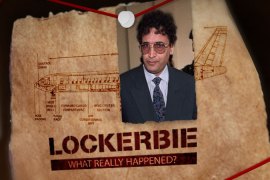 In our third and most disturbing investigation into the bombing of Pan Am Flight 103, we ask who was responsible. 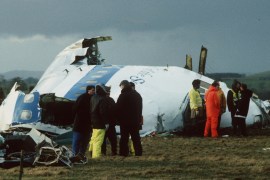 Ghosts of Lockerbie stirred with prospect of posthumous appeal

Legal team for Abdelbaset al-Megrahi and even some relatives of victims welcome decision that could pave way for appeal. 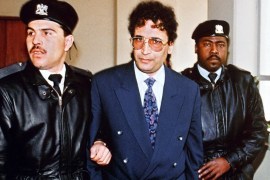 Abdel Basset al-Megrahi, who died in 2012, was found guilty but his family have made a posthumous appeal.