Eighteen fishermen held by Libyan forces for more than three months have been released, with Italy’s prime minister and the head of foreign affairs headed to Benghazi to bring them back.

The group of sailors – eight from Italy, six from Tunisia, two from Indonesia and two from Senegal – had been detained since September 1 for allegedly operating in Libya’s territorial waters – a claim that Italy has disputed.

Di Maio praised the work of Aise, the Italian secret service dedicated to missions abroad, for their efforts in returning the fishermen.

“The government continues to firmly support Libya’s process of stabilisation,” he said on Facebook, adding that he had conveyed the same message during a meeting on Thursday with Khalifa Haftar, the renegade military commander and head of the self-styled Libyan National Army (LNA).

The prolonged imprisonment of the group had become a political embarrassment for Italy’s government, with critics accusing ministers of failing to stand up to Haftar.

It was not immediately clear what concessions, if any, Italy had made to win their release.

Haftar is trying to enforce this.

Italian officials said in October that Haftar had demanded the release of four Libyans who were arrested in Sicily in 2015, and subsequently sentenced to up to 30 years in jail on the charge of organising a migrant crossing that resulted in multiple deaths.

Italy is allied with Haftar’s rival – the internationally-recognised Government of National Accord (GNA) based in Tripoli, which is headed by Fayez al-Sarraj.

The two opposing camps run parallel administrations in the east and west of Libya, following the toppling of Gaddafi.

However, Rome has sought to work with both administrations to try to slow the flow of undocumented migrants to Italy.

Meanwhile, some residents of the southern town of Mazara del Vallo in Sicily, where some of the fishermen are from, were in a celebratory mood.

“The news this morning brought me back to life after three months of darkness and desperation”, Rosetta Incargiola, the mother of one of the fishermen, told the Italian news agency Ansa. 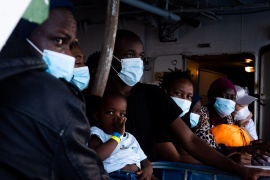 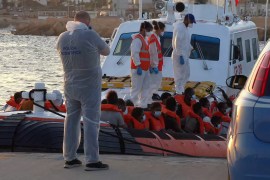 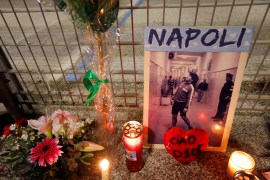