Russian President Vladimir Putin said on Thursday he was yet to decide whether or not he would run for president again when his current term ends in 2024.

Addressing reporters at his annual marathon news conference, Putin said it was too early to talk about a re-election bid when his second consecutive presidential term, and fourth in total, wraps up.

Putin has presided over sweeping constitutional reforms this year that would allow him to run for two further six-year terms as president, potentially extending his rule until 2036.

“I haven’t decided for myself whether I’ll run or not in the election in 2024,” he said.

The 68-year-old also used his customary end-of-year appearance to reject allegations that the Kremlin was behind the poisoning of one of his leading critics, opposition leader Alexey Navalny, as he accused US intelligence agencies of fomenting the claims.

“It’s a trick to attack the leaders (of Russia),” he said. “If someone had wanted to poison him they would have finished him off.”

The conference was held over video link this year because of the COVID pandemic, from Putin’s residence on the outskirts of the Russian capital, Moscow.

Navalny, 44, fell violently ill during a flight from Siberia to Moscow in August and was hospitalised in the Russian city of Omsk before being transported to Germany’s capital, Berlin, by medical aircraft.

Experts of several Western countries concluded that the Kremlin critic was poisoned with the Soviet-era Novichok nerve agent – a claim that Moscow has repeatedly denied, saying it has yet to be shown any evidence.

On Monday, the investigative group Bellingcat and Russian outlet The Insider released a report alleging that operatives from the FSB, Russia’s domestic security agency, followed Navalny during his trips since 2017.

They had “specialised training in chemical weapons, chemistry and medicine” and “were in the vicinity of the opposition activist in the days and hours of the time-range during which he was poisoned”, the groups alleged.

Partnering with CNN and Der Spiegel, Bellingcat and The Insider identified the supposed FSB operatives and laboratories where poisons like Novichok were made.

It mentioned two instances in 2019 and 2020, in which Navalny or his wife Yulia suffered from unexplained symptoms.

Navalny said the investigation proved beyond doubt that FSB operatives tried to kill him on Putin’s orders.

As Putin dismissed the investigation, he also suggested Navalny, who he avoids mentioning by name in public and instead refers to as “the patient from the Berlin clinic”, enjoyed the support of US intelligence – an allegation the Kremlin critic denies.

The Russian president said it was therefore appropriate that the country’s security agents kept an eye on him.

“But that absolutely does not mean he needs to be poisoned,” Putin added. “Who needs him?”

Navalny, for his part, has said he will return to Russia once he has made a full recovery in Germany. 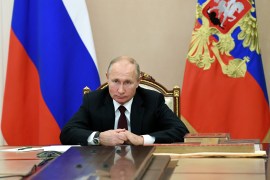 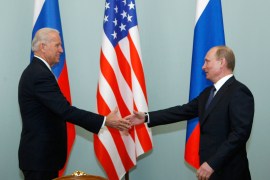 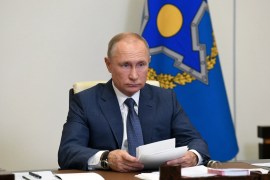 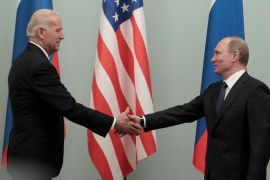 The Russian president is one of the last world leaders to congratulate Biden, having waited until official results.