Sidekan, Kurdish Region, Iraq – Mounting tensions between rival Kurdish groups boiled over when clashes broke out between the Kurdistan Workers’ Party (PKK) and Peshmerga forces in what is quickly becoming the most overt conflict between the two groups.

The exchange of fire, which took place in the Kurdish region of northern Iraq, resulted in the death of one member of the armed wing of the PKK, an outlawed group fighting for Kurdish rights, and one Peshmerga soldier.

“Three HPG guerrillas were heavily wounded,” said Hiwa, referring to the PKK’s armed wing. “The KDP did not allow the locals to help the wounded. As a result, one of them fell martyr.”

According to Iraqi Kurdish media, PKK fighters in vehicles opened fire on a Peshmerga checkpoint in an attempt to breach it.

The latest skirmish between Peshmerga and the PKK highlights the deteriorating security situation in the Kurdish region’s northern border areas, where Peshmerga and Turkish forces have set up new bases and outposts in a bid to keep the PKK at bay.

Perched atop a hill near the Kurdish town of Sidekan, a group of men laboured over a brand-new concrete structure set to house between 30 and 40 Peshmerga soldiers tasked with keeping an eye on the PKK.

The rudimentary outpost is still largely empty, except for a Kurdish flag battered by the ice-cold wind, three soldiers and their colonel.

“Those are five Turkish bases, next to them are the Iraq Border Police and the Peshmerga,” said Peshmerga deputy commander Yaseen Qadr, outlining the complex nature of the decades-old conflict in one sentence.

What started off in the late 1970s as a largely localised battle between the Turkish state and the PKK soon spilled south across the border into Iraq.

Even then, the PKK remained too close for comfort for Ankara, which along with the European Union and the United States designated the group a “terrorist organisation”.

In 1986, the first Turkish attack targeted the PKK on Iraqi Kurdish soil. Since then, the Turkish military has carried out cross-border attacks on the estimated 5,000 PKK fighters in the Kurdish region, resulting in thousands of people being displaced, wounded and killed.

The PKK has been “planning attacks from hideouts in northern Iraq for years. The idea that the PKK does not pose a threat as long as they stay on the other side of the border is detached from reality”, a senior Turkish official told Al Jazeera.

A breakdown of a two-year ceasefire between the PKK and Ankara in 2015 marked the beginning of what the International Crisis Group referred to as one of the conflict’s “deadliest chapters in nearly four decades”.

“We want to protect our civilians. If the PKK comes here, then Turkish drones will attack – people here have been killed by Turkish strikes,” said General Qadr as a deep thud echoed across the hilltops. “Turkish air strikes,” he countered, unfazed.

Below the Peshmerga outpost, at the feet of the hill, a large crowd gathered in the town of Sidekan for the unveiling of a memorial to Colonel Zuber Hali Bradosti of the Iraqi Border Police (IBP).

The Kurdish member of the IBP had reportedly approached a PKK outpost when he became the target of a Turkish air strike in August, along with his colleague Mohammed Rashid Sleman.

“My father went there to make peace [with the PKK] to stop the fighting, but Turkey attacked and he was killed,” said the victim’s son, 30-year-old Lieutenant Ayoub Zuber.

The killing sparked small anti-Turkish protests in the area, which were quickly broken up by local authorities, according to one resident.

“My father was loved so people demonstrated against Turkey,” explained Zuber. “We told them to calm down, that it was bigger than a personal issue and that it should be solved by the government not the people.”

The deployment in November of a large number of KDP Peshmerga to the border areas suggested renewed tensions between the PKK and the leading Kurdish party, whose close ties with Ankara have further complicated the trio’s complex dynamics.

However, a number of Peshmerga sources have said the move was not fuelled by a worsening in the existing intra-Kurdish dispute, but by the KDP’s wish to keep civilians safe from air attacks and to prevent Turkish forces from moving deeper into Kurdish territory.

“We are here to protect the villages,” said Colonel Tahseen Sadiq Shawkat, sitting beneath a flimsy tent in the new outpost. “The PKK are the reason that Turkey is here, if the Peshmerga weren’t here Turkey would move in.”

The ghost of the three-year civil war still lingers in the collective memory of the Kurdish people, with the vast majority deploring a full-blown battle against the PKK.

“It was terrible having to fight against our brothers,” General Qadr said of the bloody intra-Kurdish conflict that took place between 1994 and 1997. “War came to our home, so we had to fight – but no one wanted to.”

Twenty-three years after the ceasefire, a younger generation is faced with a similar dilemma. “It’s not good because we are both Kurdish, but if they fight we have to fight back,” said 40-year-old Peshmerga soldier Omid Nabih.

According to Peshmerga General Bahram Yaseen, whose brigade oversees the areas of Soran, Choman and Rawanduz, the Turkish military has bases as far as 15km (8 miles) inside the Kurdish region.

Turkey’s years-old presence in Iraq’s Kurdish region has sparked the ire of both Baghdad and some members of the Kurdistan Regional Government (KRG), who view it as Ankara’s disregard for their territorial integrity. Turkey has 37 bases in the north of the Kurdish region, according to Turkish media reports.

“As long as the PKK exists here, it will not be easy to take back the areas under Turkey’s control,” explained General Yaseen, adding 30 new Peshmerga bases were recently set up to keep the PKK from entering towns and villages and avoid Turkish attacks on civilian-populated areas.

“Many people were displaced, wounded or killed because of the PKK,” said the general, whose own hometown was emptied of residents in the 1990s.

The Turkey-PKK conflict in the Kurdish region has played out against the scenic backdrop of the mountainous area, rocking quiet gorges and sleepy towns with the sporadic roar of shelling and air raids.

This in turn has led to the emptying of an estimated 400 towns and villages, and the killing of almost 100 civilians in the last five years, according to rights group Christian Peacemaker Teams.

Mahdi Dawoud was still a teenager the first time he witnessed the gruesome aftermath of an air attack. To this day, the image of the bloodied, mangled bodies strewn across the ground is still seared in his mind.

It was August 1997 in Iraq’s Kurdish region, and like every summer shepherds with their cattle and large families on picnics had journeyed north in search of cooler weather. That day, at least seven people were killed when a Turkish bomb slammed into a hillside in Lolan, close to the Iran-Iraq border.

Years later, the 42-year-old would see three of his relatives injured in a second attack prompting him to leave his village of Siran for the larger town of Sidekan where to this day the family of farmers struggles to find employment.

“There were eight families living in my village, they had around 200 sheep, goats and cows,” said Dawoud. “We lived on agriculture and we lost all of that.”

Dawoud recalled his hometown with a hint of nostalgia – from the large family-owned farm to the abundance of fruits, vegetable and medicinal herbs. Even the weather, he says, was always pleasant. But the presence of PKK fighters meant that Turkish drones and warplanes were never far.

Even those who have not been displaced, like Barzan Khoshevi, say they are struggling to subsist as a result of the conflict. “I sell building material, but work has stalled because people are leaving and not building houses.”

The conflict, explained Dawoud, will have lasting negative effects on the entire community. “They can’t live in peace, people worry and feel sadness when they hear the sound of the strikes and the sounds of shelling.” 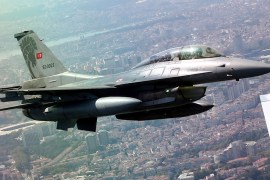 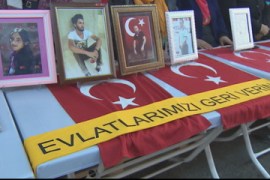 Turkey protesters call for return of those abducted by PKK

They claim Kurdish party HDP has been forcibly recruiting or luring their children and relatives to fight for the outlawed group.