Supporters of United States President Donald Trump clashed with anti-Trump demonstrators during the weekend in Washington, DC, leading to dozens of arrests, several stabbings and injuries to police officers, in disturbances hours after rallies in support of his baseless claims that he won a second term.

Police said they arrested more than 20 people for a variety of offences, from assault to weapons possession, resisting arrests and rioting.

The violence broke out late on Saturday. Four men were stabbed after a fight downtown, police said. At least one suspect, 29-year-old Phillip Johnson of Washington, was arrested on a charge of assault with a dangerous weapon.

The earlier “Stop the Steal” rallies of mostly unmasked Trump loyalists were intended as a show of force just two days before the Electoral College meets to formally elect Democrat Joe Biden as the 46th president.

Trump, whose term will end on January 20, refuses to concede, while clinging to unfounded claims of fraud that have been rejected by state and federal courts, and on Friday by the Supreme Court.

A pro-Trump demonstration last month, which drew 10,000 to 15,000 people to the capital, also ended late on a Saturday evening with scattered clashes between Trump’s allies and local activists near Black Lives Matter Plaza near the White House.

Saturday’s rallies drew dozens of members of the Proud Boys, a violent neo-fascist group, some of whom wore bulletproof vests as they marched through town.  The group saw its profile raised after Trump in September famously told them to “stand back and stand by.”

After the rallies ended, downtown Washington quickly devolved into crowds of hundreds of Proud Boys and combined forces of Antifa, a far-left anti-fascist movement, and local Black activists — both sides seeking a confrontation in an area flooded with police officers.

As dusk fell, they faced off on opposite sides of a street, with multiple lines of police keeping them separated. 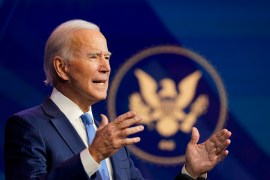 The president-elect introduced more members of his team, many of whom worked for the last Democratic president. 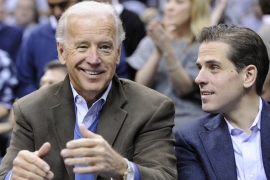 What we know about the Hunter Biden investigation 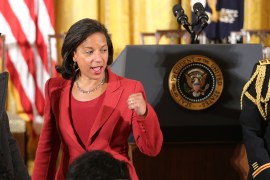