Washington, DC – Last month, after she finished serving a large order at the restaurant where she works in the United States capital, Raquel received a shock: her customer had written the word “negative” on his bill – and left her no tip.

“Biden will solve all,” another handwritten message on the bill read.

The note horrified Raquel, who only shared her middle name with Al Jazeera in fear of retaliation. It was something she had never experienced in her two years working at the restaurant. She said she believes she received those messages because she is Hispanic.

The incident took place the day after thousands of supporters of President Donald Trump congregated in the city for the Million MAGA March on November 14. Many, if not most, had travelled from across the country to support Trump and his bid to overturn the US election results.

Thousands of Trump supporters rallied in Washington, DC, on Saturday, and the crowd cheered when Trump flew overhead in the Marine One helicopter on his way to a football game in New York state.

“Wow!” Trump tweeted earlier in the day, adding that he did not know about the planned protest but that he would “be seeing them”.

Wow! Thousands of people forming in Washington (D.C.) for Stop the Steal. Didn’t know about this, but I’ll be seeing them! #MAGA

A day before last month’s MAGA march, Raquel said she served another customer who refused to wear a mask in the restaurant and loudly shared his conservative views, making those around him “uncomfortable”.

“It became kind of like a standoff situation where I’d wait until he put his mask on, and it would make him more mad,” she said.

Now, Raquel said she is once again worried about the treatment she may receive from customers who are participating in the pro-Trump protest. But she said she does not feel like she can refuse work.

“It could be a matter of days before DC shuts down in-person dining, so everyone is just trying to make the little money that they can,” she said.

At the November rally, in a crowd of tens of thousands of MAGA supporters, only a handful could be seen wearing masks, despite public health guidelines that say mask-wearing can help prevent the spread of COVID-19.

The virus is surging across the US, which has recorded the highest number of infections and virus-related deaths in the world – and local leaders have instituted various lockdown measures in a bid to stem the spread of the virus.

Worker advocates and organisers have raised concerns about the risks service employees face when customers refuse to wear masks in restaurants and hotels and they are forced to interact with them in enclosed spaces on the job.

Benjy Cannon, a spokesman of hotel workers’ union Unite Here Local 25, said some of the biggest risks hotel workers have faced during the pandemic relate to being in the same room or in common areas such as lobbies with unmasked guests.

But hospitality workers, who have been deemed essential workers during the pandemic, most often do not have a choice but to interact with those customers.

Many lack paid sick leave, as well, which makes them even more vulnerable, said Anthony Advincula, communications director for Restaurant Opportunities Centers United (ROC), a nonprofit advocacy group that supports restaurant workers across the US.

“When they feel ill, or someone falls ill in the household, it’s very difficult to make a decision whether they have to go to work and not hurt the bottom line of the family, or stay at home and not get a paycheck for the whole week,” Advincula told Al Jazeera.

These concerns are heightened among service industry workers who are Black, Hispanic or immigrants, among other marginalised communities that have been disproportionately affected by COVID-19.

According to Johns Hopkins Medicine professor Sherita Golden, many essential workers also are from these hard-hit communities – which fuels the disproportionate rates of infections and deaths.

Jennifer D Roberts, an assistant professor at the University of Maryland School of Public Health, also told Al Jazeera that “a substantial percentage of women, particularly women of colour, work in these low-wage essential jobs”.

“[These] jobs can increase COVID-19 exposure because of the contact with co-workers and the public,” she said.

Roberts said there is a stark difference between the MAGA rallies and Black Lives Matter (BLM) and other racial justice demonstrations that took place across the US earlier this year. In the latter, most participants wore masks and tried to abide by physical distancing, while in the former, those precautions are not as widely heeded – if at all.

Black people in the US have contracted COVID-19 and died from the virus at much higher rates than other demographic groups, research shows, and public health officials have pointed to systemic inequalities in healthcare access and social determinants of health as factors.

“I would guess that most, if not all of the African American BLM protesters from this summer either knew someone who had COVID-19 or someone who died from COVID-19 considering the race-based disparities that we have seen throughout this pandemic,” Roberts said.

“That alone is enough to wear your mask.”

Meanwhile, Raquel said her experience with the two Trump supporters last month made her realise that the MAGA rallies have emboldened many.

She said the staff working on Saturday evenings is mainly Black or people of colour. Many had a sense of fear and uncertainty when they returned home after their shifts on November 14, as violence broke out after the pro-Trump rally.

Some even paired up so that no one would be alone as they went home, Raquel said – and she and her colleagues are planning to do the same thing this weekend, as well.

“I think the march emboldened people who normally wouldn’t act out to show their prejudices in public,” she said. 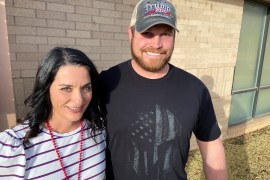 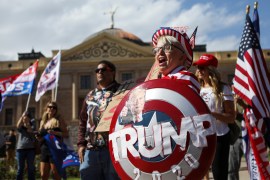 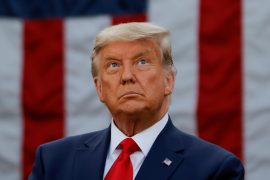 Al Jazeera spoke to Trump supporters across the US and some say he did not lose to Joe Biden.