Iran’s Foreign Ministry has summoned Turkey’s ambassador over what it said was “meddlesome” remarks by Turkish President Recep Tayyip Erdogan during a visit to Azerbaijan on Thursday.

Erdogan was in the Azeri capital Baku to review a military parade marking Azerbaijan’s victory over Armenia in a war over the Nagorno-Karabakh enclave that ended last month.

The Turkish president recited an Azeri-Iranian poem about the division of Azerbaijan’s territory between Russia and Iran in the 19th century. Tehran appeared concerned his remarks could fan separatism among Iran’s Azeri minority.

“The Turkish ambassador was informed that the era of territorial claims and expansionist empires is over,” Iran’s Foreign Ministry said on its website on Friday.

“Iran does not allow anyone to meddle in its territorial integrity.”

Foreign Minister Mohammad Javad Zarif tweeted earlier: “President Erdogan was not informed that what he ill-recited in Baku refers to the forcible separation of areas … from [the] Iranian motherland.”

“NO ONE can talk about OUR beloved Azerbaijan,” Zarif said, referring to the northwest region of Iran where many of its ethnic Azeris live.

Pres. Erdogan was not informed that what he ill-recited in Baku refers to the forcible separation of areas north of Aras from Iranian motherland

Didn't he realize that he was undermining the sovereignty of the Republic of Azerbaijan?

NO ONE can talk about OUR beloved Azerbaijan

According to Iran’s ISNA news agency, the poem recited is “one of the separatist symbols of pan-Turkism”.

It said the verses point to Aras and “complains of the distance between Azeri-speaking people on the two sides of the river”.

The poem includes the lines: “They separated the Aras River and filled it with rocks and rods. I will not be separated from you. They have separated us forcibly.”

Iran’s Foreign Ministry said it had summoned Turkey’s ambassador in Tehran over Erdogan’s “interventionist and unacceptable remarks”, and demanded an “immediate explanation”.

The envoy was told that “the era of territorial claims and warmongering and expansionist empires has passed”, according to an official statement.

It added that Iran “does not allow anyone to interfere in its territorial integrity”.

During the visit, Erdogan said Turkey would play “an important role” in the reconstruction of areas taken by Azerbaijan in the conflict, saying he and Azeri President Ilham Aliyev had agreed to move on this within a year, according to NTV.

He reiterated Turkey’s continued support to Azerbaijan: “As long as Turkey and Azerbaijan work hand in glove, they will continue to overcome all difficulties and run from one success to the next.”

In 44 days of fighting that began in late September and killed more than 5,600 people on both sides, mostly soldiers, the Azerbaijani army advanced deep into Nagorno-Karabakh, forcing Armenia to accept the peace deal.

A Russian-brokered ceasefire locked in Azeri gains and saw Moscow deploy peacekeepers to the region. Under a separate deal, Russia and Turkey will also jointly monitor the ceasefire.

Thousands in Armenia have since regularly protested, demanding that Prime Minister Nikol Pashinyan steps down. 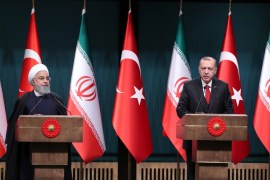 Does Turkey stand to gain after Soleimani’s assassination?

There are both dangers and opportunities for Turkey in the latest Iran-US escalation. 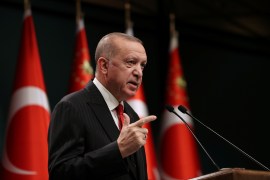 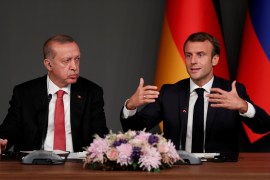 Turkish president hits out at his French counterpart, renewing a war of words between the two leaders. 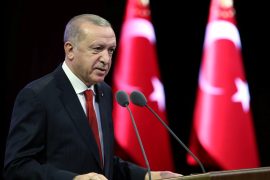 Turkish president says he sees a ‘win-win’ solution, but says Ankara will not not bow to threats over resources.