The United Nations refugee agency (UNHCR) said it has received an “overwhelming” number of reports about Eritrean refugees in Tigray being killed, abducted or forcibly returned to Eritrea since fighting in Ethiopia’s northernmost region began more than a month ago.

“If confirmed, these actions would constitute a major violation of international law,” UNHCR head Filippo Grandi said in a statement on Friday, adding his agency has met some refugees in Ethiopia’s capital, Addis Ababa.

“It is vital that Eritrean refugees be able to move to safe locations, and receive protection and assistance wherever possible, including outside of Tigray, given the traumatic events they report to have witnessed or survived,” he added.

UNHCR and other aid agencies have not had access to the four main camps hosting for Eritrean refugees – Shimelba, Hitsats, Mai-Ayni and Adi Harush – inside Tigray, since fighting erupted in early November between the government and the region’s former ruling Tigray People’s Liberation Front (TPLF).

Ethiopia’s army has captured the regional capital Mekelle and declared victory, but TPLF leaders said they are fighting back on various fronts around the highland city. Most communications in Tigray are down and access to the area is severely restricted, making it hard to verify either side’s statements.

TPLF leader Debretsion Gebremichael said in text messages to Reuters News Agency this month that Eritrean soldiers had raided two camps in Tigray and abducted some residents, but provided no evidence. Eritrea has denied this.

The refugees living in camps in Ethiopia near the border of their homeland are in an especially precarious position. Eritreans often leave to escape mandatory, indefinite military service and repression or search for better opportunities out of what has long been one of the world’s most isolated countries.

Earlier this week, Ethiopia’s government admitted federal troops fired at and briefly detained UN workers in Tigray region, blaming them for trying to reach areas where “they were not supposed to go”.

In his statement on Friday, Grandi called on the Ethiopian government to implement steps to ensure safe access for humanitarian workers in Tigray.

“Such access is urgently needed so we can provide desperately needed assistance to refugees and other vulnerable populations.”

Grandi’s statement came hours after Ethiopia’s government said it was returning Eritrean refugees to the Tigray camps, asserting that its recently completed military offensive against the forces loyal to TPLF “was not a direct threat” to the 96,000 Eritrean refugees registered in Ethiopia – even as aid groups said four staffers had been killed in the fighting, at least one in a refugee camp.

“A large number of misinformed refugees are moving out in an irregular manner,” the government said in a statement.

“The government is safely returning those refugees to their respective camps,” the statement said, adding that food was being transported to the camps.

The UNHCR was not informed of any planned relocation of refugees in Ethiopia, Babar Baloch, a UNHCR spokesman, told reporters in Geneva. He called the reports “alarming”.

He added, “While we cannot speculate at this time, any refoulement would be absolutely unacceptable.” Refoulement means forcing refugees to return to the country they fled from.

Ato Addisu, deputy head of Ethiopia’s state-run Agency for Refugee and Returnee Affairs, said, “A return to Eritrea would never happen unless they request by themselves – this is against international law”.

Approximately 580 refugees were on the buses to Tigray, he told Reuters.

‘We were getting so scared’

The news agency reported receiving frantic calls from refugees in the capital who had been told they would be bused back to Tigray but feared they were being taken back to Eritrea.

Both countries have denied this, although the US State Department said on Thursday that it believes reports of Eritrean military involvement in the conflict in Ethiopia are “credible”.

“Some Tigrayan people beat up my husband,” the refugee said. “People there were saying – ‘your country is coming here and attacking us. So you – we will kill you too.’ We were getting so scared.”

The International Organization for Migration said it was “extremely concerned” about the refugees’ “forced” return and denied it was involved, saying Ethiopia took over one of its transit centres in Addis Ababa on December 3.

An Eritrean who lives in Ethiopia’s capital, Addis Ababa, told Al Jazeera last month the camps were in “big trouble”.

Even before the conflict, people there were complaining about poor services, and a lack of food or electricity, which led many refugees in the Tigray region to move to cities to try and find work.

Eritrea has long faced accusations of large-scale rights abuses. It has accused Western powers of smear campaigns and luring Eritreans abroad, which they have denied. 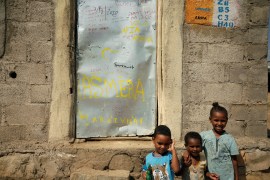 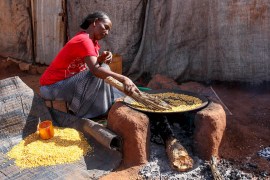 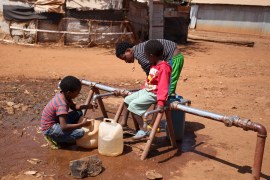 Hunger and malnutrition a real danger for nearly 100,000 people in northern Ethiopia, UN says as it calls for access.