Argentina’s lower house has approved a government-backed bill to legalise abortion, a big step forward for the legislation that could set the tone for a wider shift in conservative Latin America.

Backed by President Alberto Fernandez, the draft law, which would provide for the legal termination of pregnancy until the 14th week, was passed with 131 votes in favour, 117 against and six abstentions in the early hours of Friday morning.

It will now move up to the Senate, where an even tighter vote is anticipated.

A similar vote to legalise abortion was narrowly defeated at the Senate in 2018.

The South American country is the birthplace of Pope Francis and the abortion bill comes as several countries in the predominantly Roman Catholic region are seeing drives to give women greater reproductive rights.

A mammoth debate began on Thursday, with protesters in favour and against the legislation massed in the streets outside of Congress in Argentina’s capital, Buenos Aires.

“We are convinced that this offers a concrete answer to an urgent and structural public health problem,” said Elizabeth Gomez Alcorta, the government’s women, genders and diversity minister, as she opened the session in the Chamber of Deputies.

“The time has come to stop looking the other way.”

Protesters supporting the bill gathered wearing green scarves for an overnight vigil to await the news.

“In 2018, we were disappointed because we lost in the Senate but we hope this time it will be different … It is a right that we deserve to save women’s lives,” Ursula Celentano, an abortion rights activist, told Al Jazeera.

Opposition groups, wearing light blue scarves, also took to the streets to demonstrate against the bill.

“In the midst of a pandemic, we are invited to discuss a bill in 10 days. An express bill. Tell me if this is not genocide? When they don’t want to show what an abortion is! This is it  and they don’t want to show it. They are hiding the truth, we are not foolish people,” Mariana Ledger, an anti-abortion activist, told Al Jazeera.

The initiative includes a parallel bill which will face a separate vote to assist women who want to continue with their pregnancies and face severe economic or social difficulties.

Argentine law currently only allows the voluntary interruption of pregnancy when there is a serious risk to the mother or in the event of rape, although activists say many women often do not receive adequate care.

“Every year thousands are hospitalised because of complications with clandestine abortions and that’s why President Alberto Fernandez says it’s a matter of public health,” Al Jazeera’s Teresa Bo, reporting from Beunos Aires, said.

“For these women legalising abortion is a major step towards achieving equality, not only in Argentina but in Latin America as well.”

While the current government is strongly behind the bill, that was not the case in 2018 during the conservative administration of Mauricio Macri. 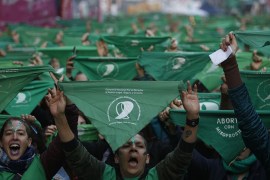 Thousands of abortion rights advocates march in Buenos Aires as new legislation is presented in Congress. 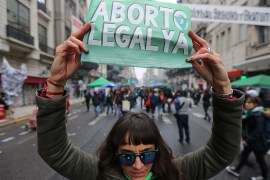 New legislation comes after similar bill passed in the lower house of Congress, but failed in the Senate last year. 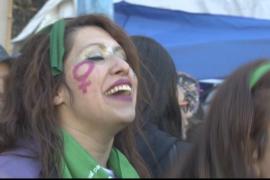 Over the last decade Argentina has passed a series of progressive laws like gay marriage but abortion was off the table until now.