Lotfi Tawfiq, who heads a committee tasked by the United Nations-recognised Government of National Accord (GNA) to search for missing people, said on Saturday that five new mass graves containing 17 bodies had been discovered since Thursday.

The graves are located in Tarhuna, from where eastern-based military commander Khalifa Haftar’s forces launched an aborted assault last year on the capital Tripoli, seat of the GNA.

The area, some 80 kilometres (50 miles) southeast of Tripoli, served as the main staging point for Haftar’s failed offensive.

The presence of mass graves in Tarhuna was first reported after the withdrawal of Haftar’s forces from western Libya in June.

Bashagha said one of the bodies exhumed was Mabrouk Khalaf, a general and former director of information.

The graves found this week are the latest in a string of grim discoveries in Tarhuna, and excavations continue.

A major oil producer, Libya has been wracked by violence since a NATO-backed uprising in 2011 overthrew and killed veteran leader Muammar Gaddafi.

Since then, the North African country has been dominated by armed groups, riven by local conflicts and divided between two bitterly opposed administrations: The GNA in Tripoli and a rival administration in the east affiliated with Haftar.

After the deal, Human Rights Watch (HRW) said it welcomed the move towards peace, but warned that the agreement failed to provide “a clear commitment and a pathway to accountability for the serious crimes and other abuses perpetuated”.

“Failure to see justice done will only hamper aspirations for a durable peace,” warned the rights group’s senior Libya researcher, Hanan Salah, at the time. 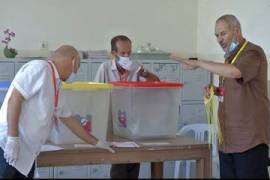 City elections in Misrata and those planned across western and southern Libya could help pave the way for nationwide elections. 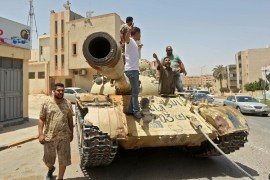 Libya’s nearly decade-long conflict has killed thousands people and displaced tens of thousands of others. 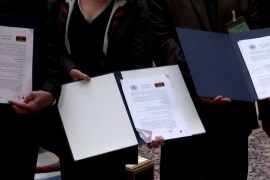