Beirut, Lebanon – The United States has sanctioned top Lebanese politician and Hezbollah ally Gebran Bassil over alleged corruption, marking the highest-profile sanctions to date levelled against an ally of the Iran-backed group in Lebanon.

Bassil, a former foreign minister, is President Michel Aoun’s son-in-law and also the head of the party with the single-biggest bloc in parliament, the Free Patriotic Movement (FPM). He is also a leading candidate for presidential elections in two years — though the sanctions likely greatly impair his viability to hold the top office.

Though the State Department officially cited corruption in a statement announcing the sanctions, the measures are widely seen as tied to Bassil’s close alliance with Hezbollah.

Basil’s partnership with Hezbollah helped to “strengthen a system of endemic corruption”, said Casey Bonfield, spokesperson for the US embassy in Beirut, but it was ultimately Bassil’s corruption that led to Friday’s designation.

As a result of the sanctions, all property and interests in property that Bassil has, and any entities owned 50 percent or more by him, are blocked and must be reported to the US Treasury. All US people or entities are prohibited from engaging in transactions with Bassil — and anyone who does may be subject to US Sanctions. This could mean anything from banks to purchase of property or goods.

The administration of Donald Trump has ramped up sanctions against Hezbollah officials and entities it said are linked with the group. In September, it sanctioned two former ministers including a former finance minister for their ties to Hezbollah and for allegedly engaging in corruption that benefited the group.

“Throughout his government career, Bassil has become notorious for corruption and has been linked to the purchase of influence within Lebanese political circles,” a State Department news release said. “While Minister of Energy, Bassil was involved in approving several projects that would have steered Lebanese government funds to individuals close to him through a group of front companies.”

Bassil, a right-wing populist, responded defiantly on Twitter, framing the sanctions as an act of imperialism tied to his alliance with Hezbollah. He said he would never put his own personal interest above that of the nation.

“Neither the sanction frightened me nor did the promises tempt me,” he said.

Bassil could not be reached for comment on the corruption allegations. An FPM spokesperson told Al Jazeera the sanctions were “clearly politically motivated” but declined to comment further, saying Bassil would address the development in a speech on Sunday at noon.

The office of the president, Bassil’s father in law, said they had “no comment,” on the matter.

A number of current and former FPM officials framed the sanctions as an attack on Lebanon’s Christian community, which make up about one-third of the population.

MP Salim Aoun, a distant relative of Bassil via the president, promised to “continue to carry the cross of Lebanon”, with Bassil.

Still, a number of those in Bassil’s party did not immediately show support for him, a testament to internal divides over Bassil’s role in transforming a political current once seen as progressive and reformist, into a party characterised by the nepotism that pervades the Lebanese state.

A number of Bassil’s relatives and even MPs in his party declined to comment when contacted by Al Jazeera.

A source familiar with the inner workings of the party said the sanctions may accelerate “dissent from some leaders and key people who will question Bassil’s strategy and the price they have to pay”.

The source, who spoke on condition of anonymity due to the sensitivity of the matter, said that the FPM’s links to businessmen and diaspora Lebanese in the US and elsewhere could take a large hit, especially given that the sanctions were levied under corruption charges rather than terrorism.

‘May they all be sanctioned’

The sanctions were, meanwhile, celebrated by many in Lebanon who detest Bassil for his alleged corruption and for his populist style which cast his party as victims of a debilitating conspiracy, all while they held the presidency, the biggest bloc in parliament and largest single share in successive governments.

During massive anti-establishment protests in October 2019, Bassil was singled out by protesters who chanted profanity-laced slogans against him and his mother. His public stature never recovered.

Twitter was awash with congratulations after news of the sanctions broke, with many Lebanese seeing the sanctions as a rare piece of good news in an otherwise dismal year which has seen the currency crash, half the population slip into poverty and 200 killed in a massive August explosion in Beirut.

“Big and overdue. When I think of many of Lebanon’s politicians I think of the mob in NYC and then I think of how they were brought down in 80’s,” said Kim Ghattas, a Lebanese writer and former BBC correspondent.  “The road is long still…”

Sanctions were also seen as a way to exact a form of justice on politicians who have rendered accountability at home unlikely by staffing the judiciary with political allies.

“May they all be sanctioned,” activist and film director Lucien Bourjeilly tweeted.

Henri Chaoul, a former financial adviser to the government, tweeted: “Sanctions should continue until they are all on their knees.” 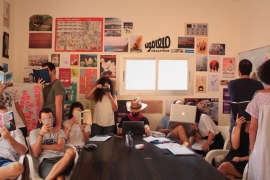 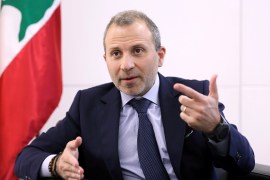 US to sanction leader of Lebanon’s Free Patriotic Movement: WSJ 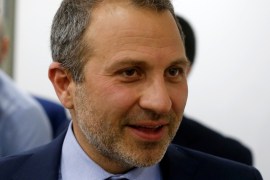 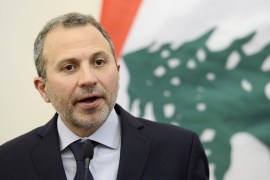 Why is Lebanon’s Gebran Bassil so controversial?

Bassil, 49, has seen his fortunes shift since mass protests against corruption and nepotism erupted last year.