In a Thursday evening address at the White House, the US president struck a typically defiant tone, accusing pollsters of interfering in the election process and Democrats of engaging in fraud – an unproven claim he has repeated throughout the week.

“If you count the legal votes, I easily win,” said Trump, adding that if “illegal votes” are counted, “they can try to steal the election from us”.

The Republican leader did not provide any evidence to back up any of his claims. It was the first time he addressed the nation since election night.

People across the US continue to wait for a projected winner in the divisive presidential contest, which pitted Trump against Democratic challenger Joe Biden and saw a historic voter turnout.

The Trump campaign filed lawsuits this week demanding ballot counting be suspended in several states that are key to winning the White House, while also signalling its intent to demand a recount in Wisconsin.

In Philadelphia, Pennsylvania, two duelling rallies of Biden and Trump supporters were held on Thursday afternoon outside a conference centre where election officials were counting ballots.

Echoing the candidates themselves, Trump’s backers want the count to be stopped, while Biden supporters are demanding that every vote be counted.

Earlier on Thursday, Biden urged people to remain calm as the ballot tabulation continues. “Each ballot must be counted,” the former vice president said from Delaware.

Democracy is sometimes messy, so sometimes it requires a little patience.

But that patience has been rewarded now for more than 240 years with a system of governance that has been the envy of the world.

“It is the will of the voters – no one, not anyone else – who chooses the president of the United States of America,” Biden said.

“There is no reason I have seen anywhere to believe that there’s a problem here,” Michael Gilbert, a professor of law at the University of Virginia, told Al Jazeera on Wednesday.

“It’s just vote-counting takes time, and they’re counting the votes. I see no evidence of fraud. I see zero evidence whatsoever of an election being stolen.”

We want every vote counted, yes every legal vote (of course). But, if you have legit concerns about fraud present EVIDENCE and take it to court. STOP Spreading debunked misinformation… This is getting insane.

“If you have [legitimate] concerns about fraud present EVIDENCE and take it to court. STOP Spreading debunked misinformation… This is getting insane,” Adam Kinzinger, a Republican member of the US House of Representatives for Illinois, tweeted.

“There is no defense for the President’s comments tonight undermining our Democratic process,” Republican Governor of Maryland Larry Hogan also tweeted. “America is counting the votes, and we must respect the results as we always have before.” 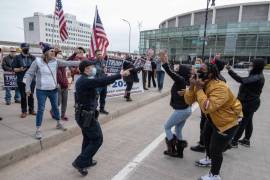 Vote counting continues in several close states that hold the key to victory for Donald Trump or Joe Biden. 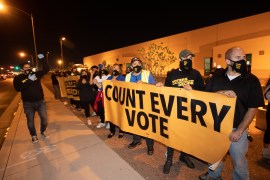 US Elections: What you need to know right now in 500 words 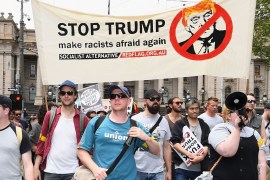 Has the US presidential election led to further divisions?

Trump and Biden supporters grow impatient as election results hang in the balance.