Conservative US Supreme Court justices on Monday appeared reluctant to issue a ruling immediately blocking a plan by President Donald Trump’s administration to exclude undocumented immigrants living in the United States from the population totals used to allocate congressional districts to states, even as they appeared sceptical of the plan itself.

The court’s conservatives, who hold a 6-3 majority, signalled that such a ruling might be premature based on the administration’s admission that it does not know how or if it will be able to implement the proposal, a facet of Trump’s hardline policies on immigration being pursued in his final weeks in office.

A ruling tossing the current legal challenge to the plan would leave open the possibility of subsequent lawsuits if the administration does actually exclude certain subsets of immigrants from the population count formally given to Congress for House of Representatives districts to be apportioned among the 50 states.

“We don’t know how many aliens will be excluded, we don’t know what the effect of that will be on apportionment. All these questions would be resolved if we wait until the apportionment takes place. Why aren’t we better advised to do that?” conservative Chief Justice John Roberts asked.

The justices were expected to decide the case on an expedited basis, with a ruling before the end of the year. Democrat Joe Biden is set to become president on January 20.

The challengers to Trump’s July directive include various states led by New York, cities, counties and immigrant rights groups. They have argued that the Republican president’s move could leave several million people uncounted and cause California, Texas and New Jersey to lose House seats.

Lawyers for the challengers urged the court not to toss out the lawsuit now, asking the justices to wait for a few weeks until more information is available on what data the Census Bureau intends to submit to the president.

House districts are based on a state’s population count in the decennial national census, which was conducted this year.

The challengers have said Trump’s plan would dilute the political clout of states with larger numbers of illegal immigrants, including heavily Democratic California, by undercounting their true populations and depriving them of House seats.

An estimated 11 million undocumented immigrants live in the US. Until now, the government’s practice was to count all people regardless of their citizenship or immigration status.

The US Constitution requires the apportionment of House seats to be based upon the “whole number of persons in each state”.

Advocacy groups such as Texas’s Jolt initiative, which organises voter registration drives for Latinos, has pushed for Latinos to register for the census all year.

The census itself does not gather data on a person’s citizenship or immigration status. Trump’s administration would base its numbers on data gathered elsewhere, though it has not explained the methods being used.

The census does NOT ask any questions about immigration or citizenship status. The census is for everyone living in the U.S. No one will see your private census data: Not your landlord. Not I.C.E. https://t.co/k2CilCap6t

Acting Solicitor General Jeffrey Wall told the justices that it is “very unlikely” the administration will have the required data to exclude all undocumented immigrants in the country. Instead, it may propose excluding certain groups, such as those in federal detention, and the total number may not be high enough to affect apportionment, Wall said.

After conservative Justice Amy Coney Barrett, a Trump appointee, asked about the fact that the government during the entirety of US history has included undocumented immigrants in the population count, Wall acknowledged that this was the case and added that this represented “the best argument for the other side”.

Barrett told Wall that a lot of the historical evidence and long-standing government practice “really cuts against your position”. Barrett also challenged Wall on the government’s position that an undocumented immigrant cannot be considered an inhabitant for the purposes of apportionment.

A three-judge panel in New York ruled against the administration in September. Federal courts in California and Maryland have reached the same conclusion in other cases though one court in Washington ruled for Trump.

By statute, the president is due to send Congress a report in early January with the population of each of the states and their entitled number of House districts. 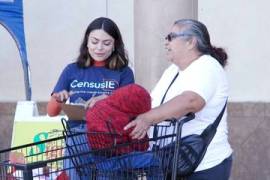 US 2020 Census: Concerns minority groups will be undercounted

Community organisers in California are trying to get Latinos to participate in the census. 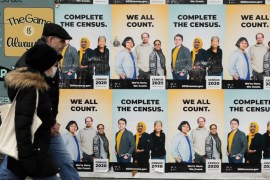 US court rejects Trump plan to leave many immigrants off census

US President Donald Trump’s attempt to stop undocumented immigrants from being counted is unlawful, court says. 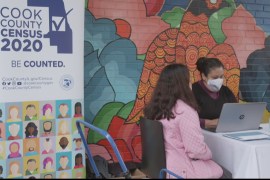 Dozens of states have taken unprecedented measures to ensure as many of its citizens are counted in the census, which determines billions of dollars in federal funding for states as well as seats in the House of Representatives.